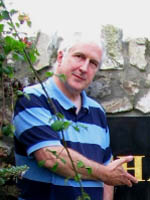 John Strong came to Bates in 1978, and holds a Ph.D. in History of Religions from the University of Chicago, an M.A. from Hartford Seminary Foundation, and a B.A. from Oberlin College. He retired from teaching in 2017.

His research program is in the area of Buddhist Studies, with a special focus on Buddhist legendary and cultic traditions in India and South Asia. He has received fellowships for his work from the National Endowment for the Humanities, the Fulbright Foundation and the Guggenheim Foundation, and has been a visiting professor at the University of Peradeniya, the University of Chicago, and Harvard, Princeton, and Stanford Universities.  He is the author of numerous articles and of The Legend of King Asoka (Princeton, 1983), The Legend and Cult of Upagupta (Princeton, 1992), The Experience of Buddhism (Wadsworth, 1995), The Buddha: A Beginner’s Guide (OneWorld Publications, 2001), Relics of the Buddha (Princeton, 2004), and Buddhisms: An Introduction (OneWorld, 2015).