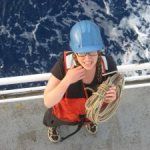 Professor Whittaker’s research interests focus on the ecological, physical, and evolutionary processes that generate and maintain diversity in the ocean.  She focuses on the vast molecular and functional diversity of marine phytoplankton, particularly diatoms.  Using molecular approaches, her work explores global structure of and geneflow among phytoplankton populations over time.  Her work has taken her to sea in the Gulf of Alaska, Southern Ocean, Central Pacific, and Gulf of Mexico.  Professor Whittaker is particularly interested in the relative influence of dispersal and environmental selection on the evolution of marine phytoplankton, as single cells constantly drifting with the tides and currents. Marine phytoplankton play an important role in regulating Earth’s climate through the fixation of carbon, and as a vital step in the biological carbon pump.  By identifying those factors influencing phytoplankton population structure, diversity, and evolution, Professor Whittaker hopes to better understand their potential for adaptation in a rapidly changing ocean.

Professor Whittaker is also interested in intersections between ocean sciences, policy, communication, and STEM education. She is a recent Sea Grant marine policy alumna where she worked on NOAA’s endangered species listing team.  While at NOAA, she contributed to ESA listing decisions of such organisms as the African coelacanth (Laminaria chalumnae), Taiwanese pink dolphin (Sousa chinensis), and common thresher shark (Alopias vulpinis), among others. In addition to Bates, Professor Whittaker also the marine science faculty member at Coastal Studies for Girls (CSG), a place-based semester school in Maine focusing on marine science and leadership education for highschool girls.  Professor Whittaker is passionate about science education and the use of clear science communication to inform policy decisions and engage communities.

A brief history of Bates and bugs, from smallpox to swine flu…

People worldwide have, for eons, confronted infectious diseases and overcome them as communities working together — and so too has the Bates community.

A Bates biology professor has a notable role in responding to a tough problem created by COVID-19: the shortage of personal protective equipment.