Bates alumni, parents, and friends contributed $28 million to the college during the fiscal year ending June 30.

“I want to express deep appreciation to all who chose to invest in Bates this past year,” said Sarah R. Pearson ’75, vice president for college advancement.

“This level of giving, during the first full public year of The Bates Campaign, reflects the pride felt by our alumni, parents, and friends as well as the excitement they feel about the direction of the college. I am especially grateful to the more than 500 volunteers who supported the fundraising effort this year.” 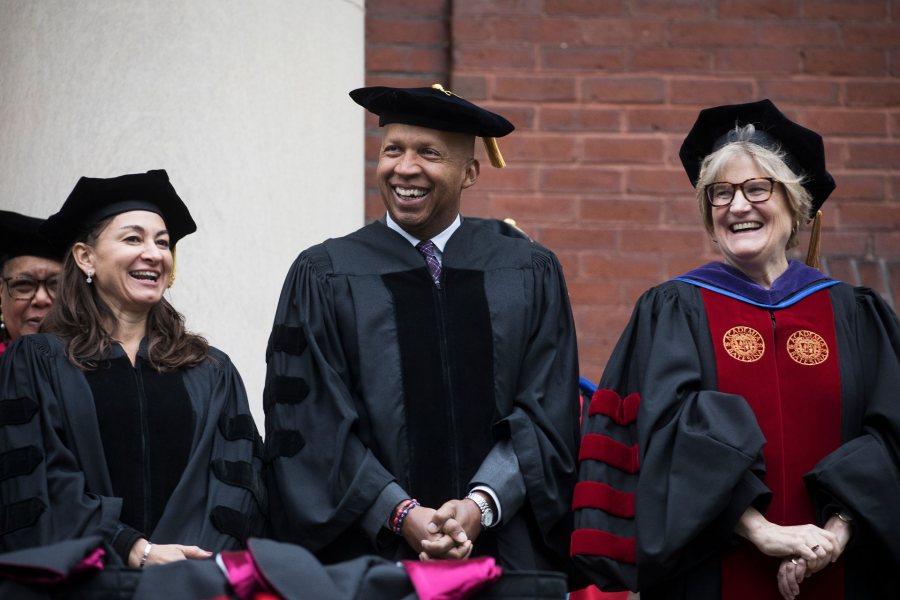 Forty-five percent of alumni made gifts, a level of participation that places Bates among the top U.S. undergraduate liberal arts colleges. Thirty-four percent of Bates parents made gifts.

The Bates Campaign now stands at $190 million in gifts and pledges toward a goal of $300 million.

Gifts to the Bates Fund totaled $7.1 million including $810,000 through the Friends of Bates Athletics. The Bates Fund is a key component of The Bates Campaign and provides real-time support for financial aid, faculty and academic programs, student life, and the arts.

Launched with public celebrations in May 2017, the multiyear Bates Campaign now stands at $190 million in gifts and pledges toward a goal of $300 million.

“I am so grateful for the support and engagement shown by Bates alumni, parents, and friends,” said President Clayton Spencer. “The steady increase in yearly giving enables us to enliven the current student experience even as we strengthen the future of the college by building the endowment. Thank you.”

During fiscal 2018, alumni celebrating their five-year Reunions helped push the Bates Fund to new heights. Overall, this year’s 14 Reunion classes, from 1948 to 2013, contributed nearly one out of every five dollars given to the Bates Fund. Reunion 2018 was also the best-attended in college history, with 1,277 attendees.

“To the hundreds of alumni and parent volunteers who support the Bates Fund effort in so many ways: Thank you.”

“The Class of 1993’s efforts are amazing — and illustrative of the great work that our volunteers do and the generous response by Bates alumni,” Pearson said. “To the hundreds of alumni and parent volunteers who support the Bates Fund effort in so many ways: Thank you. Your help and support are invaluable.”

The college’s newest alumni, the Class of 2018, completed their Senior Gift effort with 84 percent participation — the highest participation rate since 2014 — and a class gift of $13,950. Bates trustee Lisa Barry ’77 and the College Key provided special challenges to the class as it completed its gift campaign.

View the Report of Giving

Bates boasts a new fitness park and better erosion control at Merrill — while at the Bonney project, the beat goes on.