Michael Sargent, a psychology professor at Bates, wears many hats when he leaves his office on the third floor of Pettengill Hall. Since his arrival in Lewiston/Auburn, Sargent has founded The Corner, a series of open-mic storytelling events in Lewiston/Auburn, started his own podcast, Tatter, and directed his own film, Witchcraft Blue. 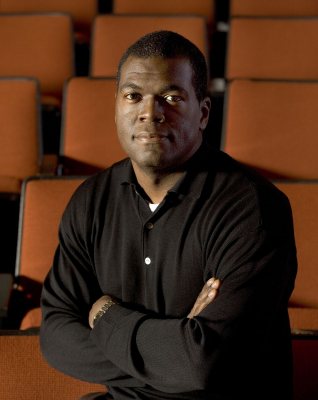 “Storytelling can serve a variety of functions for both the person who is telling the story as well as the person who is the audience, whether they’re encountering it in writing or in film or face-to-face,” Sargent explained when asked to elaborate on the fundamental value he finds in sharing stories. Some of these functions include storytelling being used as theater or storytelling being used as therapy. Sargent himself loves the challenge of only using “rich adjectives and verbs and descriptive nouns” to engage the audience and transport them to the time and place of the story, “so that in their mind’s ear… they can hear and translate this into their mind’s eye.” He goes on to explain “when I look out and I see that people aren’t talking to each other, they’re hanging on my word and they’re waiting to hear what happens next, that gives me pleasure […] I definitely get a rush out of the sense that, for five minutes, everyone is listening and everyone wants to know what happens next and everyone is in the time and place of the story. No one feels as if they’re actually sitting in this room, to take it to the extreme.” Although Sargent’s personal storytelling routinely takes the form of theater, he also thinks stories can be told in order to create meaning out of traumatic events or, based on the words of Peter Aguero, a Moth Grand Slam champion who Michael Sargent has interviewed multiple times, stories remind us that we are not alone in the world. Whether you’re resonating with someone else’s story or seeing that someone is resonating with a story you’re telling, Sargent believes that storytelling is “ultimately about building and reinforcing relationships and community because [it] is a way of creating and finding and strengthening connection.”

Although he hesitates to label his documentary film, Witchcraft Blue, as a film that tells a story, it wrestles with important questions about burlesque dancing and burlesque dancers, a community that Sargent is familiar with. He had wanted to make a movie for a while, had gained some level of filmmaking experience producing promotional videos for The Corner, had access to the many filmmaking resources that are available at Bates, and had his mind set on a subject matter that he wanted to bring to the attention of others. “When I ultimately was thinking ‘I want to make a movie’ I thought, burlesque is inherently interesting, it’s probably going to be forgiving subject matter for a first-time filmmaker because it’s so inherently interesting […] I have access to burlesque performers and burlesque performers are not shy, I thought it would not be difficult to get permission to shoot at shows, shoot backstage, and do interviews, and in fact I have been humbled at how much the Portland burlesque scene welcomed me with open arms” said Sargent regarding his choice of subject matter for his first film.

While the film doesn’t follow a narrative structure, its organization is a key component of Sargent’s design. The film consists almost exclusively of one-on-one interviews with burlesque performers and clips of live performance footage that are structured into a coherent order. “I feel sheepish in calling it a story because it’s not. If a documentary that tells a story is one that follows specific characters through the events that define a particular narrative sequence, this is not that kind of a film. I’ve actually thought of Witchcraft Blue as more akin to an essay than a story, and… the organization that I had in mind was that of an essay with multiple sections or perhaps a short book with multiple chapters, each of which is organized around a question,” said Sargent about how he imagined the film’s structure. The film begins with the question of how burlesque dancing relates to commercial stripping, a distinction that Sargent wants the general public to have more of an understanding of. While Sargent is “very sympathetic to the position that it is a mistake to characterize burlesque as more artistic or more classy, whatever that means, than commercial stripping,” his experience teaching classes about sexuality and reputation and his personal experience with friends who are burlesque dancers have given him a specific understanding of the burlesque world and what differentiates it from the world of commercial stripping.  Other sections of the film contain interview clips focussed on what motivates burlesque dancers to do burlesque, the role humor plays in burlesque and what kinds of humor are deemed acceptable, if burlesque is diverse and body-positive as it is celebrated to be, and the place of the LGBTQ+ community in the burlesque scene. Sargent made it clear that he prioritized showcasing the diversity of opinions on these topics that exists throughout the burlesque community and with interviews conducted backstage and places that looked like the dancers’ homes, he clearly aimed to depict the community in an unfiltered way.

As opposed to showcasing a specific community on film, Sargent follows more of his own varied interests in his podcast, Tatter. He began the podcast series with the intention of giving people who live in Lewiston/Auburn a space to tell their stories, but he realized he wanted the podcast to have more of a focus on politics and policy, two of his longtime interests. Plenty of episodes are explicitly political in their focus, but in others, for example, an episode about the demographics of the craft beer industry, Sargent aimed to “explore politics in a context that people don’t always think of as political.” The topic for each podcast episode usually comes from an event that has been in the news recently or a friend of Sargent’s who he thinks is doing something interesting. Sometimes, though, the topic comes to him. “I’m actually scheduled to do an interview […] with a Bates graduate who is the mother of a young trans daughter and [she]  has been eager to talk to me on the podcast about trans issues” explained Sargent. “So that was a case where the topic found me, and I’m really excited and sadly, given some of the rhetoric and policy directives coming out of The White House, such as attempting to require federal agencies to stipulate that gender is based on genitalia, determined at birth, and is fixed, it’s timely to try to put a human, not face because it’s a podcast, but a human voice on these issues.”

Michael Sargent’s research in psychology focuses on implicit bias, and more specifically implicit racial bias. Some of his podcast episodes are explicitly related to implicit bias and, potentially because of Sargent’s social circles as a psychologist, they are the most downloaded episodes.  “I was recently looking at the number of downloads per episode of Tatter and I was feeling bad,” Sargent admitted. “I was thinking you know there are podcasts out there that get, with each episode, tens of thousands or hundreds of thousands of downloads and I’m nowhere near that. I’m usually a few hundred, although the implicit bias ones, those are over a thousand, so I was feeling bad about myself… like why am I doing this podcast? No one’s listening, only a few hundred people are listening. Then I went into the psych info database to see how many people have cited articles that I’ve written. When I saw those numbers, suddenly I felt pretty good about hundreds of people listening to my podcast. I mean one of the cool things about the podcast is even if I’m not reaching as many people as Joe Rogan who has one of the most listened to podcasts, I’m still reaching more people and engaging more people in a conversation about implicit bias through the podcast than I will ever reach through my scholarly writing, as important as my scholarly writing is.”

Ed. Note: Emma Lammers ’19, an intern in the Dean of Faculty’s Office is the author of this piece.