From L.A. to L.A.- The Curious Blend of Interests Driving Professor Tom Sapsford 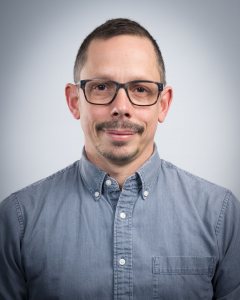 What do contemporary dance and Ancient Greece have in common? More than you might think, argues Professor Tom Sapsford from behind the inevitable smile of a man combining his two passions in his new role at Bates. Through his new work, Performing the Kinaidos: Unmanly Men in Ancient Mediterranean Cultures, Sapsford aims to prove that this unique combination is more than just an interdisciplinary folly.

But it hadn’t always been this way. Finding his dancing feet at the Royal Ballet in London’s Covent Garden, where he worked as a professional ballet dancer and choreographer, Sapsford admits that he originally kept the two worlds “very separate.” It wasn’t until the end of his undergraduate study at the University of Bristol that his love of the ancient world was fully realized, and with a scholarship for a PhD program in Los Angeles, the second of his talents was born. But he never forgot his dancing roots. “I’ve always been very interested in performance in the Ancient World, because I have a way of understanding it that’s quite different and unique to other people,” he notes. “I’ve had several mentors who have shown me ways of being able to look at dance through an academic lens, because one part of my knowledge is experiential, whereas it’s the opposite for my classics, so trying to bring the two together in a way that works has taken a little bit of negotiation.”

Now, having found the equation, Sapsford can revel in the unique delight this seeming mis-match brings audiences. He concedes, however, that the birth of modern dance had already spread some roots in Ancient Greece. “When you look at the birth of modernity, a lot of those figures are drawing on Ancient Greece, especially in the ballet,” he said. He highlights the Ballet Russes with fondness- “it was absolutely shocking to the audience… it was absolutely so modern and exciting, they went crazy for it. The tricky thing is finding ways to talk to more than one audience.” And that’s where his new work finds itself on the shelf of modern literature. “The Kinaidos is this outrageous figure in Ancient Greece, Greco-Roman Egypt and Rome- outrageously effeminate and sexual, particularly with other men.” He ponders with the patience of a man who has no doubt faced these types of puzzlements before. “This term gets used for a particular type of performer… he dances in a particular way, he shimmies his buttocks, and he has a particular form of poetry and rhythm. This is a gross generalization, but I say that I’m writing on Ancient Roman drag queens!” Tracking the Kinaidos’ appearance from Platonic dialogues, Sapsford is clearly enjoying his venture with the character.

Still, his rich background across the performing arts could’ve offered Sapsford a different route than his one to Bates. After London, he admits that life in Los Angeles was strictly “studying” and “Ancient Greek culture,” but movie and Broadway experiences have stuck with the new Professor of Classical and Medieval Studies for life. “I’ve been in movies, I got to work for Alexander McQueen in one of his fashion shows… it is very different (to Bates), yes, and a lot of my colleagues who are still dancing are surprised by the route I took.” While he admits that parts in hits like Kinky Boots and Beyond the Sea were minor, it’s worth keeping an eye out for his dancing talents in the corridors around his second floor office in Pettengill. “I walk around with all of those ballets in my head- I know the steps for multiple parts to maybe thirty-odd ballets… they don’t just go away!” But it brings it all full circle with his new life at Bates, which he describes as a “place where dance is really important.” Reflecting, he notes, “what’s so odd about all that is that I spent all that time training to be able to say exactly what I wanted to say without using words, and then I started again and started learning all these ancient languages.” Thus, it was no surprise to hear him practicing Ancient Greek with a student on the approach to his office.

And yet, amidst all of this, there is one more aspect of Sapsford that makes him unique among his colleagues- he’s British. Mulling over the political developments there and his favorite foods from back home, he has seemingly found great happiness with the pace of life afforded by Bates’ “peaceful” campus and the history of Lewiston, as opposed to life in London or California. “I’m really surprised,” he admitted. “I hadn’t visited here before I came a month ago, and what’s ironic is moving from one L.A. to another! I’ve not been in this kind of town before, and I find it fascinating. I’m very happy being here.” In his world of blending old and new, the history of Lewiston and the modernity of resources at Bates has satisfied Sapsford once more.

Categories: blog Focus on the Faculty