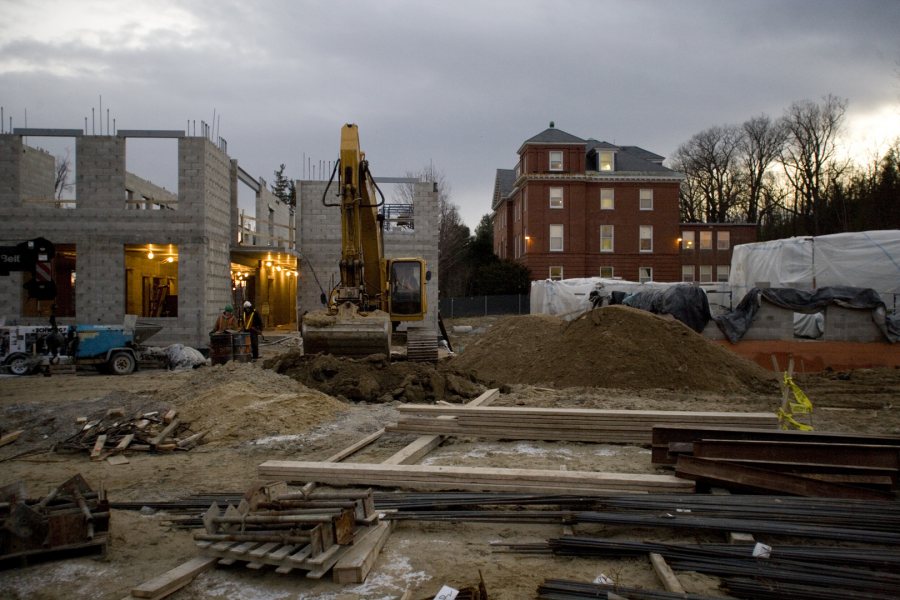 This image of the new student housing was taken from Mountain Avenue on Dec. 5. The center section of the facility is taking shape in the area past which Rand Hall is currently visible. By August, this perspective will face the residence coordinator’s front porch. (Phyllis Graber Jensen/Bates College)

For the most part, until next spring, “we’re done with construction outside the fence” that surrounds the new Commons site, said Paul Farnsworth, manager of the Commons-Bates Walk construction project.

The exception, some tree clearing along Andrews Road related to the Bates Walk, is scheduled for the Christmas break and should be finished when students return to campus in January.

“We’d like to thank the campus for being tolerant of changes in traffic flow,” he said. “Hopefully there won’t be a whole lot more until we get into the Bates Walk work next spring.”

The autumn’s last project “outside the fence” was a new sewage pipe line laid in November to replace a 94-year-old ceramic pipe, prone to tree-root invasions, under the service road next to Chase Hall. That project not only ended utilities-related traffic disruptions, at least until spring, but should also end plumbing backups in Alumni Gym and the Gray Cage, Farnsworth noted.

Parking squeeze eased: As the city’s seasonal restrictions on curbside parking took effect Dec. 1, Bates people stymied by the shortage of parking welcomed some relief. Closed for weeks because of construction, Andrews Road reopened for parking on Dec. 4. About two dozen spaces will be back in service until Bates Walk work resumes in the spring — again, excepting the Christmas break closure for tree removal.

Residential walls: Concrete block walls have begun to rise on the center section of the new student housing. The center unit, which links two wings — aka “flankers” — is the only part of the structure with a basement, and received its ground-level concrete floor in November. (The basement floor, incidentally, will be poured later.)

Making for some dramatic views at the base of Mount David, the flankers pretty much have their second-story block walls in place. Precast, pretensioned concrete flooring planks for the third stories arrive this week. Installation of the planks — 25 feet long, 3 feet wide and 8 inches thick — will take a couple of days, said project manager Pam Wichroski.

Meanwhile, workers are installing first-floor interior framing. And, with an eye on students moving into the facility next August, Wichroski noted that she’s writing up specs for the facility’s furniture now. “We’ll be issuing the furniture bids out to vendors in January and we’re hoping to actually place the orders in February,” she said. “If we place orders in February or March, we’re pretty much guaranteed to have delivery.”

Commons ground: The frost wall for the foundation of the new Commons is half completed. But extensive utilities work needs doing before the foundation slab itself will be poured, Farnsworth noted. That won’t happen until spring, but nevertheless steel framing for the structure should start to rise by February. So the shell of the building will be well in evidence by the time the floor is poured.

(Read more about the new Commons.)

Notes from underground: If utilities work is hardly glamorous, underground pipes and cables do exert a certain archaeological fascination. As excavations for the new residence commenced last summer, for example, a dig at Parker Hall revealed mysterious utility lines not shown on any plan. But nearby, on Mountain Avenue, workers never found a sewer line that the city’s plans said was there. (Note: An earlier version of this article incorrectly stated that mysterious utilities were unearthed in Rand Field.)

Across campus on North Bardwell Street — formerly a city thoroughfare, now the road serving the Smith and Wentworth Adams dorms — a test pit dug during the fall revealed that a substantial length of old ceramic sewage line had failed. “We had a guy snake a camera down, and discovered that about 100 feet of line had collapsed,” Farnsworth said. Fortunately, the line had never backed up.