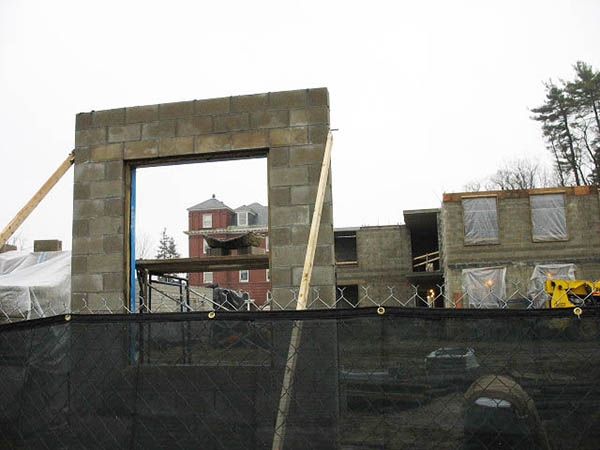 In this Dec. 14 image of the new student housing, 101-year-old Rand Hall is framed through an opening in a freestanding section of wall. This wall was created as a model of proper construction techniques for the actual building. (Doug Hubley/Bates College)

While most Bates people will be away from campus from Dec. 22 until January, construction workers will still be busy on the new student housing at Mount David and the dining Commons-Bates Walk project.

Andrews Road, connecting College and North Bardwell streets, will bear one of the most conspicuous signs of progress when campus life resumes. As part of Bates Walk [an early name for Alumni Walk — Ed.] construction, most of the trees that now line this service road and parking area will be removed. A section of the thick screen of spruce trees near Roger Williams Hall will be taken, too. (See a campus map.)

But some landmark trees will remain, said Paul Farnsworth, project manager for the Bates Walk and new dining Commons: among them, the saucer magnolia next to Hathorn Hall whose spectacular blooms announce the arrival of spring, and the twin larches between Dana Chemistry and Hedge Hall.

“We thought it was safest and easiest to do it when fewer people are here,” Farnsworth said in reference to the timing of the tree work. Frozen ground is less subject to damage from heavy equipment, too.

Much of the Bates Walk will be replanted next year following utilities work. In the concept created by project architect Sasaki Associates, more than 100 18-foot paper birches will form a grove running the length of the current Andrews Road. The walkway will emerge from the grove onto a quad in front of the new Commons.

Paper birch (Betula papyrifera) was chosen for a variety of reasons. This pioneer species grows fast and has multiple stems, so the grove is “going to look finished as soon as the trees are in,” Farnsworth said.  Native to Maine, the species is familiar from its graceful form and peeling black-and-white bark (which Native Americans used to sheathe their canoes).

Notes from underground: In addition, the holiday break is affording the opportunity to run a stormwater drainage line from the site of the new Commons to a catch basin between Pettengill and Smith halls. The drain will be part of a large stormwater detention system that will divert runoff from all of the Bates Walk into Lake Andrews, which catches runoff from much of the campus.

Residence news: Work on the new student housing will continue through the holiday break, said project manager Pam Wichroski. The third-story walls for the cluster’s two wings, or flankers, are rising now, and by Jan. 8, when students return to classes, the flankers’ steel roof structures should be apparent. The flankers’ rooflines will resemble a traditional saltbox house, Wichroski said. The angled roof was designed to soften the effect of the building’s height in this predominantly residential neighborhood.

“The third-floor rooms on the outermost edges, looking out on College Street and on Mount David, will have sloped ceilings almost like a doghouse-type dormer,” she explained.

Imaging Center: Finally, Bates staff will use the break to install technology in the Bates Imaging and Computing Center, in Coram Library. Although no official opening date has been set, the center is expected to be in service by mid-January, said center director and chemistry professor Matt Côté.

The center will house myriad high-tech resources for handling visual data, ranging from microscopic views of nanostructures to large-scale digital art photographs. Because visual information is integral to so many disciplines, concentrating these resources in a central facility is a powerful way to advance interdisciplinary collaboration.

A lounge area complete with coffee service will encourage students and faculty in diverse disciplines to hang out, swap ideas and show off their projects. A snazzy wall of flat-panel video monitors will reveal works in progress. And the center’s décor will stand out on campus, Wichroski added, thanks to a lively color scheme.

See you in January: This column is taking a break for the holidays and will resume early next year.