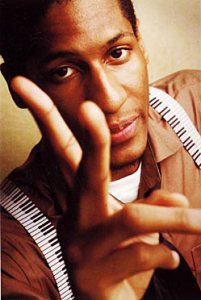 Led by a jazz pianist whose acclaim belies his youth, the Jonathan Batiste Band performs at Bates College at 7:30 p.m. Friday, May 1, in the Olin Arts Center Concert Hall, 75 Russell St.

Admission for this concert in the Jazz at the Olin Arts Center Series is $16 for the general public and $6 for seniors and non-Bates students. For tickets, please visit www.batestickets.com. For more information, contact 207-786-6135 or olinarts@bates.edu.

In his early 20s, Batiste is already a bright star in the New York jazz firmament. He has been invited to play with top musicians across genres including Wynton Marsalis, Cassandra Wilson, Lenny Kravitz and South African players Ernie Smith and Musa Manzani.

Batiste was introduced to music by his family’s band, the Batiste Brothers Band, in which he started on percussion at age 8 and switched to piano around age 12. He released the first of his two CDs as bandleader in 2003. “Times in New Orleans” featured such Crescent City players as Jason Marsalis, Donald Harrison Jr. and Christian Scott.

In 2004 Batiste graduated from the New Orleans Center for Creative Arts, then studied at The Juilliard School. In 2005 he made his debuts at Carnegie Hall and the New Orleans Jazz & Heritage Festival. In 2008, he was a featured member of the 2008 NBA All-Star Game Halftime show, the youngest artist alongside Allen Toussaint, Harry Connick Jr., Dr. John, Ellis Marsalis, Art Neville and Ivan Neville.