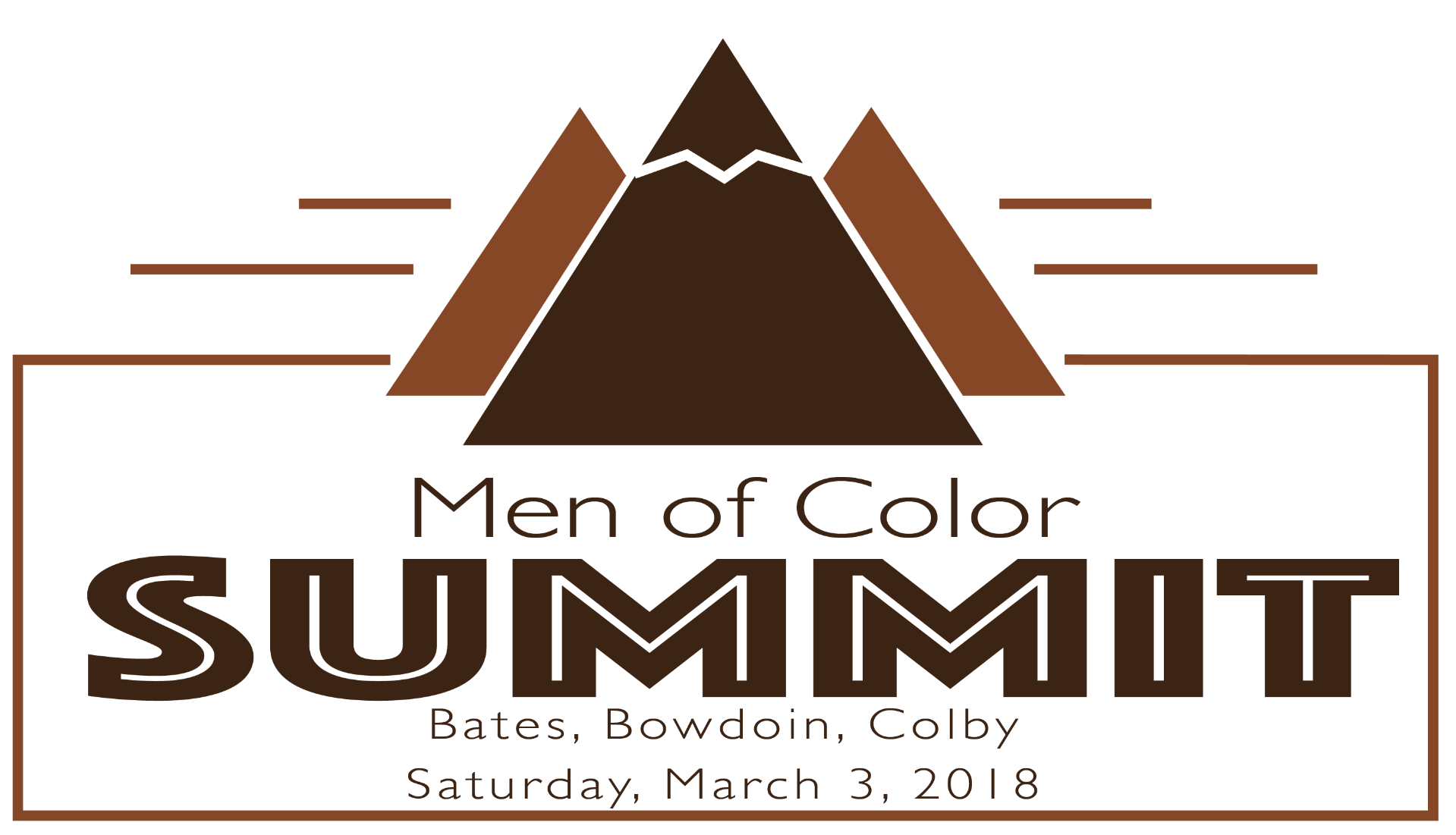 Registration will be from 7:30AM until 8:15AM.
Tickets are free for current Bates, Bowdoin, and Colby students .
Space is limited. Please register as soon as you are able.

The Bates, Bowdoin, and Colby Men of Color Summit will host undergraduate men of color from around the state of Maine. This Summit will host thought-provoking conversations, learning, and networking opportunities for all participants. Some of the topics that will be addressed include, healthy relationships, resilience, developing solidarity across cultures and what it means to be a man of color in the current social and political climate. There will be keynote presentations and workshops from men from varying professions and backgrounds as we highlight the importance of striving for excellence in all that we do. The BBC Men of Color Summit will be held on March 3rd, 2018 at Bates College. 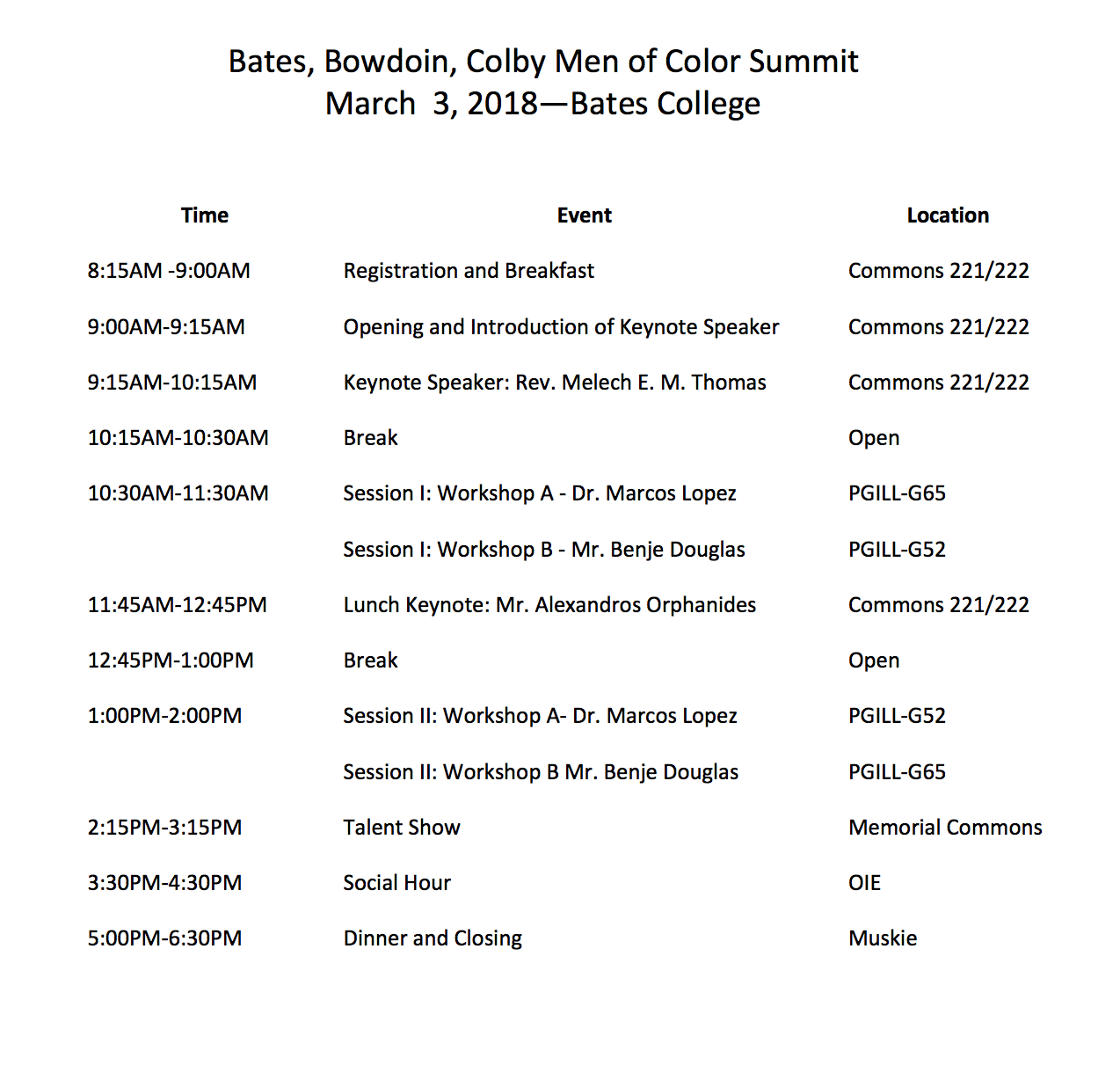 Rev. Melech E. M. Thomas is an ordained minister and community activist with a heart for cre- ating innovative ministry and developing leadership skills amongst people of all generations, both churched and “un-churched.” “Pastor Melech”, as he is affectionately known, was called as the Se- nior Pastor-Elect of the Christian Love Missionary Baptist Church on the Westside of Chicago, Illinois on December 2, 2017. Prior to this call, Rev. Melech served as the Youth Pastor at Covenant UCC in South Holland, IL., where in his first 6 months, over 110 young people made decisions for Christ. Melech is a graduate of Howard University with a Bachelor of Arts degree in Communication and Culture and a Minor in Community and Economic Development. He also received his Master of Di- vinity from the Samuel DeWitt Proctor School of Theology at Virginia Union University, under the tutelage of Dean John W. Kinney. He has also completed studies at both Chicago Theological Sem- inary and Princeton Theological Seminary, respectively.

In 2010, he was selected by the Hilltop as the most influential Howard University student on campus in its annual “Hilltop 24” listing of influential students and he was selected as “Who’s Who Among American College Students”. In 2011, the Samuel DeWitt Proctor Conference awarded Rev. Thomas with the Wyatt-Lucy Fellowship, given to high achieving young adults with a heart for faith- based social justice. On October 10, 2015, he was selected to give the opening Christian prayer at the 20th Anniversary of the Million Man March, making him the youngest speaker on that day’s program. Recently, his courageous leadership and service during the Freddie Gray protests in Bal- timore were featured on the front page of the New York Times website as the “Young Leader in Bal- timore.” His prophetic voice and his insightful commentary have been sought after by local, nation- al, and international media outlets such as CNN’s Anderson Cooper 360, CNN International w/ Don Lemon, ABC News’ “This Week”, CBS’ “The Early Show”, PBS’ “The Rock Newman Show”, the Canadian Broadcasting Corporation, Belgium’s public broadcasting network VTR and print publica- tions like The Washington Post, The Baltimore Sun, The Boston Herald, Buzzfeed, Black College Wire, BET.com, and The Final Call. A portion of his preaching and teaching has been used by the General Board of Discipleship of the United Methodist Church.

As a nationally respected preacher of the Gospel, Melech served as an Assistant to Father Michael Pfleger at the Faith Community of Saint Sabina in Chicago, Illinois for three years. He also served under the Rev. Dr. Frank M. Reid III at Bethel AME Church in Baltimore, Maryland, as an As- sistant to the Pastor and Ministerial Intern for Community Transformation. Most recently, he served as the Pastor for Youth, College, and Young Adults at the Ward Memorial AME Church in Washing- ton, DC, where he created a weekly Saturday service entitled “The Bridge”, a contemporary wor- ship experience geared towards the unchurched. As the former chairperson of the Young Ministers’ Roundtable of the AME Church’s Second Episcopal District, Melech led the efforts to raise nearly $5,000 for the AME Church’s Homeless Shelter in Raleigh, NC.

Alexandros Orphanides is a teacher, writer, and thinker born and raised in Queens, New York. He is the proud child of two immigrant parents; his mother is from Honduras and his father is from Cyprus. His experiences growing up as a first generation kid, existing between three languages and living in the most diverse neighborhood of the country, inform his work as a scholar to this day.

During the day, he teacher high school history in the Bronx, with an emphasis on critical thinking and facilitating engagement between students and their communities.

By night, Alex researches, writes and publishes on a wide range of issues including race and ethnicity, culture, identity, education, immigration, and politics. His work has been featured in NPR, Complex Magazine, Huffington Post, Truthout, and In These Times.

Additionally, he’s published a book chapter titled Identities under construction: portraits of urban Latino adolescents. His work has been cited in educational and anti-racism curricula, and he enjoys speaking with and learning from students.

López received his Ph.D in Sociology with a designated emphasis in Latin American and Latino Studies at the University of California. With support from the Woodrow Wilson Foundation, he is working on a book-length manuscript, El Agua Calienta: Agrarian Landscapes, Water and the Undercurrents of Indigenous Farmworker Resistance that examines alienation within simplified agrarian landscapes in Baja California and how indigenous migrants, originally from southern Mexico, mobilize their cultural practices to organize for better working conditions and access to water in their settlements.

López takes great pleasure in his teaching. At Bowdoin he teaches Immigration and the Politics of Exclusion; Food, Agriculture and Social Justice; Latinas and Latinos in the U.S.; Global Labor Politics; the Classics of Sociological Theory; Introduction to Sociology; and Current Controversies in Sociology.

Benje connects students at Bowdoin to resources available on campus and in the community surrounding instances of sexual misconduct, gender based violence, and Title IX compliance.
Benje serves as the College’s Title IX Coordinator. His responsibilities include: explaining the processes available through Bowdoin’s Sexual Misconduct and Title IX policies;
supporting the Complainant and Respondent of an investigation in equal measure; and helping students navigate the law enforcement process.

Benje joined Bowdoin in July of 2014 following a career in a variety of violence prevention and
response programs including a domestic violence shelter, rape crisis center, and a national
resource center. He received his undergraduate degree from Truman State University in
Kirksville, Missouri and has graduate degrees from Brite Divinity School (TCU) and Harvard.

Registration: Registration will be from 7:30AM until 8:15AM.
Tickets are free for Bates, Bowdoin, Colby, and other partner schools.
Tickets are limited to 20 per school and require a passcode provided by your school’s liaison.