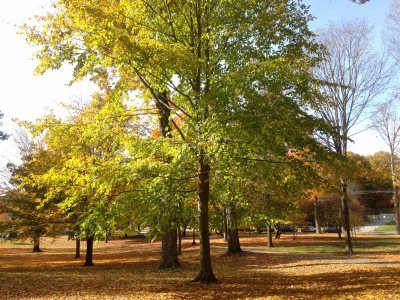 Twigs – slender, lance-shaped, and imbricate with stipule scars. The terminal bud is about 1” long.

Fruit – 2 or 3 edible nuts within a small bur with soft spines.

The American beech (Fagus grandifolia) is a medium to tall tree native to North America. A member of the Fagaceae family, this tree is closely related to other commonly known trees such as all species of oak and the American chestnut tree. Found in well-drained acidic soil, this tree can reach up to 100 feet in height and will have a fairly rounded crown at maturity. Due to its ability to send out root suckers, this tree is usually found in groups. 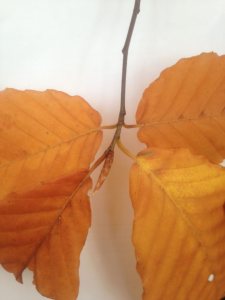 American beech leaves are observed to be marcescent, with withered leaves staying on the tree throughout the winter. Fagaceae as a family is known to produce tannins in its leaves during the fall, giving them a characteristic brown appearance and dissuading herbivory due to the associated harmful impacts on animal digestive systems.

The appearance of the bark is fairly familiar, being light grey and incredibly smooth, popular for carving initials. American beech trees do suffer from beech bark disease; a fungal disease that can lead to crater-like scars on the bark. This occurs when the feeding site of an insect, the woolly beech scale (Cryptococcus fagisuga), is occupied by a fungus (Nectria coccinea var. faginata). The red fruiting bodies of the fungus can be seen on the bark cankers and will mature in the fall. This pathogen causes significant mortality in American beech trees.

Beech-nuts begin to ripen in the fall and are contained in a spiny involucre. These nuts are very high in fat content and are an important food source for many wildlife species in Maine. Bears, especially, are known to be very predatorial about beech trees, returning to trees that they know are producing nuts. These bears will climb up the trees and create nest-like twig formations in the branches by shoving sticks underneath themselves to support their weight while consuming large amounts of beech-nuts.

American beech wood has many uses with its almost white appearance. The wood is most commonly used to make toys, cookware, furniture, barrels and charcoal. Being very resistant to decay, the wood was used in colonial times to make water wheels. American beech is a very popular ornamental due to its low branching and wide horizontal spread; a common tree on Bates Campus.