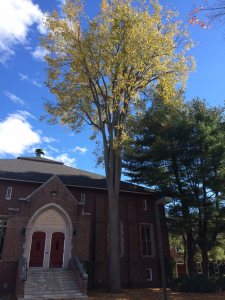 Leaves – simple, deciduous, alternate, about 5″, coarsely doubly serrate, usually scabrous above, and often pubescent below with an inequilateral base.

Fruit – is a 1/2-3/4″ samara deeply notched at the apex with ciliate wing margins; matures in spring.

American elm (Ulmus americana) is a member of the Ulmaceae family, a group that includes 16 genera and approximately 150 species. Also known as white elm, soft elm, and water elm, American elm is a medium-sized tree with a distinct vase-like form that has long been esteemed for its elegance. Today, however, this species is primarily known for its rapid decline resulting from the spread of Dutch elm disease.

American elm is a species that has, in the past, inhabited a relatively wide range of sites. The species is intermediately tolerant to shading and naturally grows as a component of several different deciduous forest types. It does not naturally occur in stands of its own. When unaffected by Dutch elm disease, these trees typically live to 175 to 200 years of age, and it is not unheard of for individuals to reach 300 years. Its native range extends along the eastern coast of North America from central Florida to Nova Scotia and reaches as far west as Montana. Within its range, this species is typically found on moist bottomlands. It is not, however, restricted to them and may be found on soil types varying from sands to bogs.

American elm has important ecological as well as human uses that have been limited since its decline. The seeds are a food source for small mammals and birds, and the wood has been used for furniture and veneer as well as for hockey sticks. The most notable human use of this species, however, may be as an ornamental along town streets and throughout college campuses.

Unfortunately, Dutch elm disease has devastated the American elm population. The disease is caused by the fungal pathogen Ophiostoma sp. when it is introduced to the tree’s vascular system by the elm bark beetle. It can also be transmitted between trees by naturally occurring root grafts. The pathogen arrived in the United States of America in 1930 with a shipment of logs from Europe. Individual trees can be treated with chemical injections, but this is not practical on a large scale. Although hybridization has been a successful strategy for developing resistance in elm species, this technique is difficult in American elm because it has two times the number of chromosomes as most other elm species.