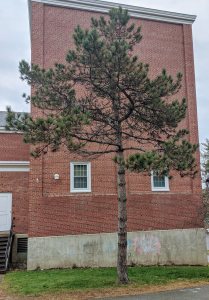 Twigs and buds – Opposite branching with waxy and resinous buds.

Cones/flowers – A monoecious species, cones are about 3” long; ovoid; umbo armed (spiked) with an inconspicuous spine.

Bark – Dark brown to black bark that is widely split by flaking fissures into scaly plates which becomes increasingly creviced with age.

Native to Europe and Asia, the Austrian pine (Pinus nigra) is a large, intolerant tree that grows well on high pH soils. In the United States, Austrian pine has been widely planted in New England, around the Great Lakes, and in the Northwest. Although not native to North America, it has since naturalized in northern states and is often planted as an ornamental tree. At approximately 80 years of age, the tree reaches maturity at a height that ranges from 66 to 165 feet (20-50 m).

The Austrian pine (Pinus nigra) is often planted along streets in New England for its salt-resistant qualities, a feature vital to withstanding high salt concentrations that result from the persistent road de-icing that occurs in the winter months. With a rough texture and less durable wood than its brothers Red pine and Scotch pine, the Austrian pine is not a valuable timber species in the United States. Today, its purpose in the US is largely ornamental, but it is also used more practically in the Midwest as a shelterbelt tree–a physical barrier of trees and shrubs used to prevent erosion on farm fields. Though non-native to the US, the Austrian pine has naturalized into the environment after extensive planting as an ornamental and shelterbelt tree.

Aside from its ornamental and wind breaking purposes, the US forest Service recommends planting the Austrian pine over areas once decimated by surface mining, or other ecologically detrimental activities because of its resistance to high concentrations of toxic heavy metals.

Often confused with its native look-alike the Red pine (Pinus resinosa), there are several characteristics that differentiate the Austrian pine. The easiest and most consistent way to distinguish the two species is by examining the needles. When bent at a sharp angle, the Austrian pine needles bend, while Red pine needles will SNAP! Beyond needle characteristics, the bark of mature Austrian pines is dark brown to grey, while that of Red pine is reddish grey. Beware seed-eating herbivores: the small spiky ridges on Austrian pine cone scales act as a natural defense to protect the seed from consumption. 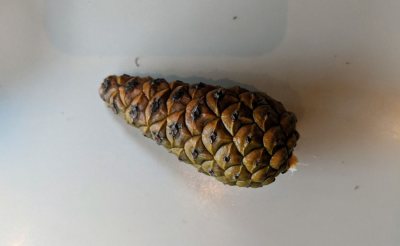 Currently the International Union for Conservation of Nature lists the Austrian pine as a species of least concern due to its large, widespread, and genetically diverse population. Still, several ailments are known to affect the Austrian pine, including the red band needle blight, and brown spot needle disease, both of which are caused by fungal pathogens and can lead to the demise of infected trees. Fortunately, a high genetic diversity across the species means that it is extremely adaptable and is of low risk for widespread death of disease.