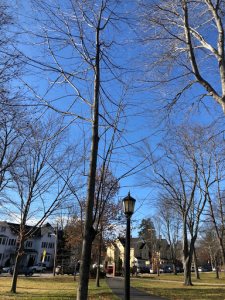 New England is known for its vibrant foliage that draws in tourists every year to gaze at stunning red leaves. For that sought-after autumnal beauty, look no further than the autumn blaze maple (Acer x freemanii). This fascinating tree is a cultivar that occurs through the select breeding of red maple and silver maple, lending properties of each to the autumn blaze maple that makes it a “best of both worlds.” While this hybridization has also been known to occur in the wild, it is quite rare and difficult to identify. It has the fast-growing and resistant nature of the silver maple while maintaining the quintessential beauty of the red maple that truly makes it a favorite for autumnal color.

Anatomy of the autumn blaze maple reflects the cross of its red and silver maple parentage. Its leaves are oppositely branched and deciduous, and tend to be between 4 and 6 inches long with five lobes and irregular teeth on the edges. The stems and veins of leaves can be red or green, and leaves have a glossy green upper surface with a silvery underside. The glabrous twigs are often brownish with new growth being red, and are covered in white dots called lenticels. Like all maples, autumn blaze maple is oppositely branched. The terminal buds are large, and loosely imbricate with potentially a light pubescence. The lateral buds are far smaller, and have 2-3 scales. As befits the autumn blaze maple, the buds are also red. Vascular bundle scars often appear with three dots arranged triangularly around the buds. 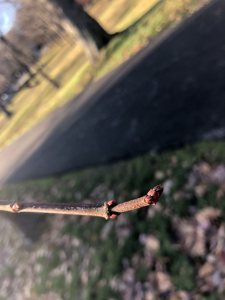 Interestingly, because autumn blaze maple is a cross between two species, it exhibits hybrid sterility, and are unable to reproduce on their own. However, some individuals will flower and sprout clusters of small red or green flowers. Occasionally, they produce fruit in pairs of semi-diverged, winged nutlets, called samaras. The bark of the autumn blaze maple is smooth, thin, and delicate, which only adds to its ornamental popularity. As the tree ages, the bark becomes shallowly furrowed. Take good care of these trees, though; the bark is quite easy to damage, especially if it is in an area with more frost or pedestrian traffic, for instance.

This tree species grows in a wide range of climate from Wisconsin to Florida, and is also planted widely throughout Australia, New Zealand, Canada and France. It prefers moist, well-drained soil and full sun to partial shade. In hot Australian sites, it has shown a significantly greater drought tolerance than red maple. This increased relative hardiness has allowed it to grow well in dry, alkaline soils. Autumn blaze maple also exhibits growth rates up to four times faster than that of red maple, further increasing its appeal as a tree for landscaping. 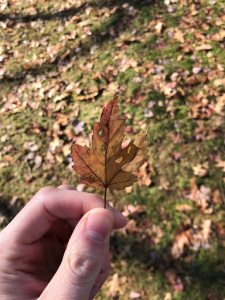 Autumn blaze maple is a cultivar, meaning that it was bred by crossing the red maple and the silver maple, rather than being a natural species. The breed was first successfully crossed by Oliver Freeman at the US National Arboretum in 1933. In fact, the species is patented and its breeding is legally restricted. It was first sold as a cultivar in the late 1960’s by a nursery owner named Glen Jeffers. This is where the cultivar gets its alternate name, known as “Jeffersed.” Starting in 1982, the hybrid cross was developed and sold widely again by Poplar Farms, Inc. (Batavia, IL). Propagation occurs through grafting, but more successfully through rooted cuttings. In recent decades, the tree has been distributed widely across North America and other suitable zones. It is ubiquitously found as an ornamental tree in the likes of rain gardens, parks, and personal properties. After all, the tree was named aptly; like a fiery beacon in the fall landscape, the foliage of an autumn blaze maple is truly something to behold.