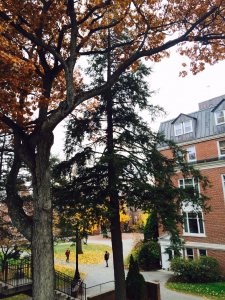 Needles – 2-ranked; 1/2″ long; tapering from the base to the apex; 2 lines of stomata on underside.

“When the wind lifts up the Hemlock’s voice, it is no roaring like the Pines, no keening like the Spruce’s. The Hemlock whistles softly to itself.”–Naturalist and botanist Donald Culross Peattite

Known as the state tree of Pennsylvania, the backbone of the nineteenth century hide-tanning industry, and a common source of bark mulch and pulp, the Eastern hemlock (Tsuga canadensis) has long stood as a pillar in American society. Stretching upwards to a height of 60-70 feet tall with a diameter of 3 feet, this conifer is capable of living over 800 years. It is generally capable of withstanding considerable shading, making it perhaps the most tolerant of all gymnosperms. While it has a high understory tolerance and the ability to re-establish itself, unfortunately the hemlock is currently devastated by the hemlock woolly adelgid (HWA). Since the adelgid’s introduction into Richmond, Virginia in 1951, the Eastern hemlock has faced considerable decline in the northeast. Nevertheless, the Appalachians native tree still stand tall throughout the Northeast where it can be found mostly in cool inlets but can also be present on rocky outcrops.

Eastern hemlock bark is cinnamon-red to gray and is divided into narrow, rounded ridges, which are covered with thick scales. As the bark matures, it becomes scaly and deeply fissured. While hemlock bark has wonderful anatomical characteristics, the most valuable component is found within the bark: large content of tannins. For this reason alone, Eastern hemlock trees were the most preferable and desirable bark used in the hide-tanning industry during the late 18th and early 19th centuries. Tanning is the process of converting animal hides into usable leather by soaked them in tannic acid. By binding the collagen proteins in the leather, tannins make leather less water-soluble and more resistant to decomposition. Thus, due to high tannin content and the creation of a distinctive deep, reddish-brown color, hemlock tannins were highly valued.

During the 19th century, the heyday of the tanning industry, 64 tanneries were operating in the Catskills. It is estimated that 70 million hemlock trees were harvested for their bark. In particular, the Pratt tannery alone used 100,000 cords of hemlock bark from roughly 400,000 trees during a 20-year period. Since the bark was the only desirable portion of the tree, once trees were cut down and bark removed, the remaining lots of wood were left to rot in the forest.

Ultimately, the tanning industry began to decline starting in the early 1900s. By this time, hemlock stands throughout the northeast were heavily depleted. Furthermore, attitudes in regards to tanneries changed due to the large amount of pollution produced and the fear among Americans that forests were heavily exploited. Despite such extensive harvesting, hemlock was able to rebound in population due to the intrinsic biological capacity of the species to survive.