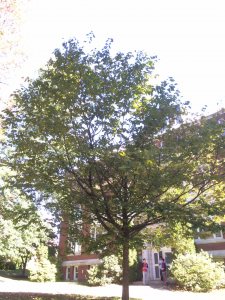 Leaves – similar to yellow birch (B. alleghaniensis), but secondary veins may branch.

Bark – smooth and reddish-brown when young; later breaking into thin, shaggy plates that give it a characteristic shreddy appearance.

Eastern hophornbeam (Ostrya virginiana), is also referred to as ironwood or leverwood. It is a small to medium-sized tree in form, and it typically reaches between 30 to 50 feet in height. While younger trees have an ovate to pyramidal shape, older trees tend to be rounded and exhibit more irregular branching patterns. For a healthy younger tree, the branching is upright and spreading.

The buds and catkins of eastern hophornbeam are an important winter food source for the ruffed grouse bird, with the nuts being a secondary food in the fall. It is also a preferred food source for sharp-tailed grouse and wild turkey, and is eaten by bobwhite, red and grey squirrels, cottontails, white-tailed deer, ring-necked pheasant, purple finch, rose-breasted grosbeak, and downy woodpeckers. Eastern hophornbeam is particularly prone to disease and rot in the trunk caused by the fungal pathogens, but is considered to be basically free of insect diseases.