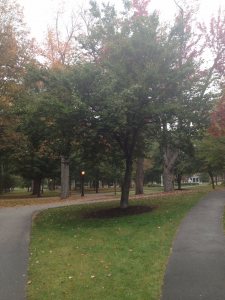 Twigs – slender, lance-shaped, and imbricate with stipule scars; terminal bud is about 1” long; similar to F. grandifolia, but twigs and bud scales are often pubescent.

Fruit – 2 or 3 edible nuts within a small bur with soft spines; similar to F. grandifolia, but larger.

The European beech (Fagus sylvatica) is an important, medium-sized tree native to Europe, and ornamental in the United States. Its range covers most of western, central and eastern Europe, including, France, Germany, Switzerland and surrounding countries to the north and south. European Beech has several cultivars, including “copper” beech and weeping beech. “Copper” beech has red-brown leaves and a very large canopy similar to European Beech. Weeping beech differs from European beech in that it creates a large, draping canopy, similar to weeping willow.

Similar to American beech, the fruit (a beech nut) is a small nut borne in burrs with soft spines. European beech trees do not begin to produce beech nuts until they are roughly 40 years of age. Providing an excellent source of nutrients, beech nuts are devoured by birds, squirrels and bears. Beech nuts have also been used as a major component of the human diet during times of hunter and gatherers, as well as for colonists when agriculture was low. However, they are known to have a distinctly bitter taste due to their high level of tannins, which is one reason they were not consumed to the same degree as walnuts or hazelnuts.