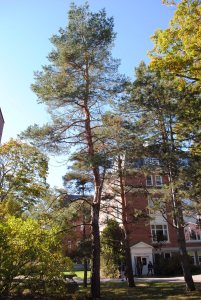 Whether it’s gracing your living room during the holidays or embodying the spirit of birth in celtic culture, the Scotch pine (Pinus sylvestris) is one of the most important pines. It is the most widely distributed pine tree in the world. Scotch pine is native to northern Europe and Asia, but is also found in other areas such as the United States as an ornamental. Its natural range spans from Scotland in the west, to the Pacific Ocean in the east, and from the Arctic Circle in the north, to the Mediterranean in the south. Throughout this range it grows to be a beautiful towering timber tree in dense stands. Scotch pine is extremely resilient and can grow in acidic, loamy, moist, sandy, well-drained and dry soils. This endurance and its moderate drought resistance allow it to span half of the world. In this massive range, Scotch pine grows to a height of around 60 feet and a canopy spread of around 40 feet at maturity. It grows at a medium rate from less than a foot to no more than two feet of vertical growth a year. 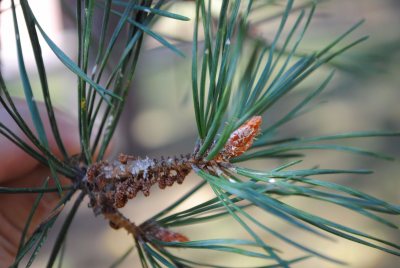 Scotch pine is one of the most common Christmas trees in the United States. It makes such a good Christmas tree because it retains its needles, resists drying, and if it does dry the tree still does not drop its needles. In addition, Scotch pine responds well to plantation culture and is widely planted in this way through the Eastern United States and Canada, to be grown as Christmas trees. When this species is established in plantations it usually takes about 6-8 years to produce a tree about seven feet tall. In Europe and Asia, the Scotch pine is used for pulpwood, poles, sawlogs, and veneer. Scotch pine is one of the strongest softwoods and is therefore used for construction. Other parts of the tree provide secondary uses past timber. For example, it can be tapped for resin to make turpentine, rope can be made from the inner bark, tar from the roots, and dye from the cones. Dry cones also make excellent kindling. The species is also valued as an ornamental trees for its vivid and distinctive orange bark. All of these factors mean that this beautiful tree is also of great economic value.

In addition to its economic value, Scotch pine is culturally relevant in Celtic mythology. Druids, learned Celts who acted as priests, teachers and judges, associated this pine with the coming of the sun after the dark winter. It was paired with the Yew tree, as the twins of the Winter Solstice. Yew represented the death of the old, while the pine embodies the birth of the new. Scotch pine bonfires were lit to encourage the sun to come back and fertilize the land following winter. 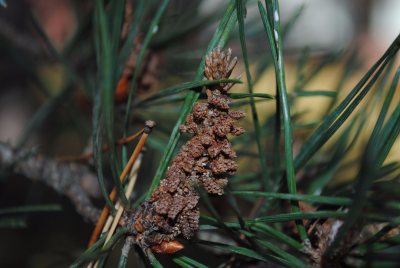 Bark – Upper regions of the bark has a conspicuous orange color.