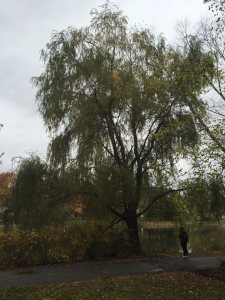 It was at the Musée d’Orsay where amongst paintings ranging from Cezanne to Gauguin, one stood out the most, “Saule pleureur” by Claude Monet. The blending colors of the leaves and the textured bark, and the dreamy atmosphere of the painting brought me back to my countryside house in Normandy where a weeping willow stood tall. Under this tree I would spend hours playing as a child and trying to climb as high up as possible ignoring my parents’ pleas to come down at once. This weeping willow was a symbol of refuge during my childhood and here it is now, on Bates campus facing the puddle.

The weeping willow (Salix babylonica) is part of the Salicaceae family and is a medium to large sized deciduous tree with rapid growth but short lived. The branches of the weeping willow are pendant and fall like a curtain around the trunk providing a significant amount of shade beneath. The twigs are orange-brownish and the leaves are thin, light green, but turn yellow in the fall, lanceolate shaped and spirally arranged around the branches. The weeping willow is dioecious, meaning that the male and female flowers will grow on separate trees.

The Weeping Willow was given its scientific name Salix Babylonica by Carl Linnaeus in the 18th century who attributed this tree with one that was described in the Bible in the opening of Psalm (which was actually a poplar tree). The weeping willow most likely originated in China and was traded along the silk road to Europe and is now found in North America. It is mostly used as an ornamental tree because of its beautiful pendulant branches, but it can also be used for instrument making, such as flutes. Native Americans used the branches to make paintbrushes and the bark for its healing properties when treating fever and pain. Interestingly enough, salicin can be extracted from the willow bark and is an active ingredient in aspirin. The weeping willow tree is susceptible to many diseases such as powdery mildew, tar spot fungus, and bacteria blight, but the damages can be diminished by pruning and use of fungicide.