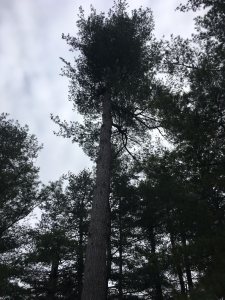 The Eastern white pine has great significance to wildlife. Numerous species of songbirds and small mammals feed on white pine seeds, while snowshoe hares and various deer graze on the needles. The bark, roots, and seedlings are food for pocket gophers. The high canopies and robust branches provide residence for bald eagles in addition to cavity-nesting wildlife. Young black bear cubs use these strong branches to help them climb to safety.

Eastern white pines are a historic symbol of New England. When Europeans first arrived to the Northeast, primeval forests of white pines towered 250 feet tall, grander than any other tree in New England. Colonists found many important uses for the exceptionally light and strong white pine wood. Ship masts were cut easily from the long, straight boles, and white pine shingles covered the rooftops. Eastern white pines quickly became the primary export of American colonists. However, as the stands of white pines grew thinner, England decreed that the best specimens were to be saved for ship masts for the Royal Navy. The royal emblem was blazed onto the finest trees remaining across New England, a territorial move by England that angered American colonists, sparking the Pine Tree Riot of 1772. This was the first real test of British authority preceding the American Revolution. Colonial citizens stood their ground by demonstrating local control over their own natural resources. Over the next century the white pine served as a staple of New England’s logging industry. Despite being over-logged, the eastern white pine has bounced back in population and continues to stand as a pillar of New England forests. 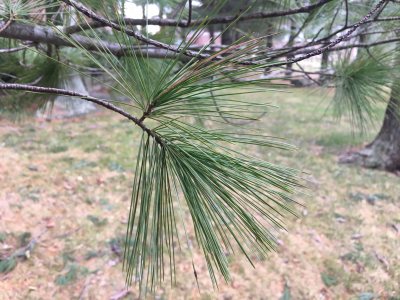 Silvics – The eastern white pine is the largest conifer in the northeast United States and spans from the Appalachians to southeastern Canada. It is intermediately shade tolerant, but survives best in cleared areas with access to lots of sunlight. Pinus strobus commonly grows as a pioneer in abandoned pastures. Eastern white pines are often found in well-drained acidic soils, and they are sensitive to both road salt and air pollution.