By Christopher Schiff. Published on November 6, 2012 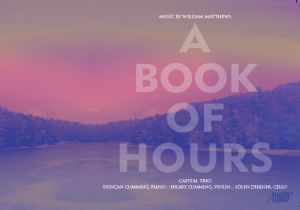 Attendees of the inauguration of Clayton Spencer were treated to the premier of “The House Was Quiet and the World Was Calm,” by Alice Swanson Esty Professor of Music, William Matthews.  While this setting of Wallace Stevens’ poem was for a full orchestra and chorus, Matthews’ most recent recording, “A Book of Hours,” garners large rewards from small ensembles.

“The Book of Hours: Music of William Matthews” is available in the Bates library on CD:

Streaming file from The Database of Recorded American Music (DRAM)

Bill Matthews’ “The House Was Quiet and the World Was Calm” will be reprised by the Bates College Orchestra on its November 10th concert.  Admission is free, but tickets are required.  For reservations or more information contact: Olinarts@bates.edu or 207-786-6135