Looking for a good scare? 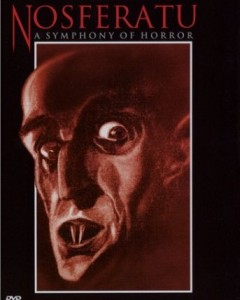 The leaves have changed color, the nights are getting longer, and everything tastes like pumpkins; it’s autumn in Maine, and there’s no better time to watch scary movies. The Audio Department has you covered, with a selection of some of the most frightening cinema ever put to celluloid. Here are a few of our favorites–but make sure you watch with the doors locked and the lights on.

Why not begin at (nearly) the beginning, with F.W. Murnau’s classic silent film Nosferatu (1922). An adaptation of Bram Stoker’s Dracula in which the names had to be changed for legal reasons, Nosferatu stars Max Shreck as the vile Count Orlock, a creature of the night determined to bring his evil to the modern world. Where Stoker used vampirism to represent sexual decadence, Murnau’s Count is a symbol of disease, spreading a plague wherever he goes. Despite its age, the movie is still unsettling and eerie, aided by the director’s skillful manipulation of shadow and framing, and Shreck’s otherworldly presence. (If you’re looking for other interpretations of the source novel, check out Todd Browning’s Dracula (1931), a stodgy Universal picture notable for introducing Bela Lugosi into the world, and Francis Ford Coppola’s Bram Stoker’s Dracula (1992), which is ridiculous, but looks pretty.)

If vampires aren’t your thing, why not indulge in a more literal sort of cannibalism with George Romero’s zombie masterpiece Night Of The Living Dead (1968). A horror movie that changed the way we made horror movies, Night Of The Living Dead tells the story of a group of desperate survivors trapped in a farmhouse and battling off wave after wave of mindless, flesh-eating undead. It’s visceral, political, and gruesome, with a pessimistic take on humanity’s ability to bond together in a crisis, and deeply unsettling violence. While the shock of broken taboos may have dulled over the years, Night retains a large part of its power, and remains crucial viewing for gray days and lonely nights. (If you enjoy Romero’s work, make sure to check out the just as good and maybe even better Dawn Of Dead (1978), which throws in color, better gore, and some blunt but effective social satire. For another take on the zombie genre, see Danny Boyle’s 28 Days Later (2002), which amps up the adrenaline with hordes of disease maddened psychotics.)

For those looking for a bit more faith in their fright fests, there’s always William Friedkin’s The Exorcist (1973). An adaptation of William Peter Blatty’s novel, The Exorcist focuses on a young girl, Regan (played by Linda Blair), possesed by a demon. The premise may seem absurd, but in Friedkin’s capable hands, it works terrifyingly well, as Regan’s mother (Ellen Burnstyn) struggles to find help for her daughter through first conventional, and then spiritual means, ultimately turning to a doubting priest (Jason Miller) and a man with some experience at exorcism (Max Von Sydow). The scares range from the brutal to the subliminal, and Friedkin’s direction renders every beat of the story in straightforward, unblinking realism, making the horrors all the more haunting. (If you enjoy The Exorcist, you’ll want to avoid The Exorcist II (1977), unless you’re in the mood for a mesmerizingly terrible film; however, The Exorcist III (1990), which stars George C. Scott, is excellent.)

Finally, no Halloween is complete without a look at arguably the scariest movie ever made, Stanley Kubrick’s The Shining (1980). Based on the novel by Stephen King, The Shining follows Jack Torrance (Jack Nicholson), a reformed alcoholic with a troubled past who takes on the job of winter caretaker at the Overlook Hotel, an isolated Colorado resort which closes from late fall to early spring. For the winter months, Jack, his wife Wendy (Shelley Duvall), and his young son Danny (Danny Lloyd), will be trapped alone in the mountains, with only themselves for company. Only, Jack has a temper, and there’s a presence in the Overlook determined to exploit it for their own fell purposes. Kubrick’s film strips King’s story of its more overt occult elements, focusing instead on Jack’s descent into madness, as isolation takes its toll and the snow banks rise. (For those interested in another take on a classic King book, check out Brian De Palma’s Carrie (1976), starring Sissy Spacek and Piper Laurie. And if you like you’re ghosts ambiguous and literary, try Jack Clayton’s The Innocents (1961), an adaptation of Henry James’ The Turn Of The Screw, starring Deborah Kerr.)