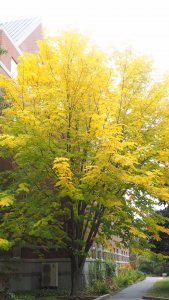 Twigs – stout with naked buds that are completely enclosed within the petiole.

Fruit – a 3-4″ legume, often constricted in the middle.

Yellowwood (Cladrastis kentukea) is a rare, medium sized tree (15-20m) native to the southern Appalachians, Arkansas, and Missouri. Its scientific name is derived from the Greek words klados, meaning “branch” and thraustos, meaning “fragile,” which refers to the brittle wood and branches. Kentukea indicates the tree being “of Kentucky.” It gets its common name from the yellow tint in the heartwood. 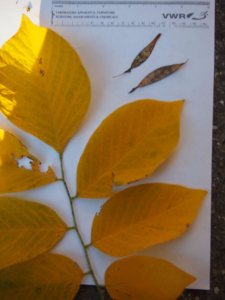 The only species of Cladrastis in the United States, yellowwood grows throughout the southeastern United States and as far west as northwestern Arkansas and northeastern Oklahoma. It can grow across the continental United States, though it is endemic to the southeast and is most abundant in the Appalachian and Ozark mountain ranges. Yellowwood has been cultivated in the northeast and part of southern Canada, but rarely escapes cultivation. The distribution of yellowwood and its closest relatives in Asia suggests that yellowwood is an ancient tree that was widely distributed before the Ice Age and was able to survive in the Appalachian and Ozark mountain ranges. The tree is mainly found in rich, fairly moist, upland forests, but is often found in the understory of forests and on stream banks. Moderately tolerant of shade, yellowwood grows best with full sun in moist, well-drained, alkaline soil and will tolerate a large range of pH. Yellowwood is long-lived with slow to moderate in growth rate, achieving a height of 8m in 20 years.
Native Americans used yellowwood for building and carving. Root bark was used as a dye and the wood for gunstocks by early settlers in the southern Appalachians. Nowadays, the use of yellowwood has shifted focus toward aesthetics due to its showy flowers that hang in clusters. The white flowers appear in summer, have a pleasant fragrance (some say a sweet vanilla-like smell), and are an important source of nectar for honeybees. Although only giving spectacular floral displays every 2-5 years, yellowwood is often planted as an ornamental tree.