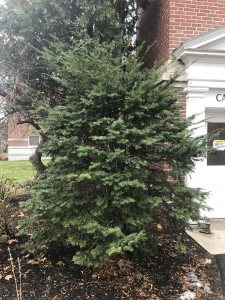 Twigs – Alternating twigs are green to yellowish in color with branches that spread and ascend.

Bark – Thin, reddish-brown bark that becomes thin and scaly as the tree ages.

Canada yew (Taxus canadensis) is an understory shrub typically found in late successional forests. This gymnosperm is very shade tolerant and will often form dense layers near the forest floor. Canada yew is able to propagate heavily due to its reproductive habits. Long-distance dispersal of Canada yew seeds is handled by birds, but the power play is this shrub’s ability to clone itself via asexual reproduction. This habit enables Canada yew to achieve what is called layering in the forest understory, a phenomenon where a single species is able to crowd out competition and establish a dominant presence. This monoecious, woody plant has a vast range, extending from Manitoba, Canada, to Maine, down as far as the Virginias. While exceptionally beautiful and seemingly appetizing, the seed of Canada yew is poisonous to humans and should not be consumed. The seed is a small red drupe with a fleshy pericarp, strikingly crimson against the tree’s green leaves. Not one to be picky about real estate, this small conifer grows in a variety of settings, from bogs, mixed forests, gorges, and beyond. Without a doubt, Canada yew will be encountered as one travels throughout New England. 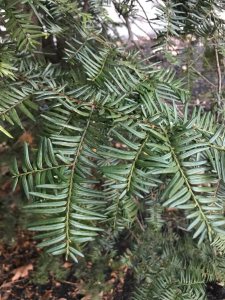 Although poisonous when ingested, the yew species is an integral component in medicine development for cancer treatment. In 1971, researchers seeking plants that may possess anti-cancer properties discovered a chemical compound in the bark of relative of T. canadensis called pacific yew (Taxus brevifolia). This chemical, called paclitaxel, has been shown to be clinically effective against ovarian, breast, and lung cancer. Previously, paclitaxel was extracted from the bark of the Pacific yew, a slow growing Pacific Northwest tree, by stripping the bark of the tree. To make the medicine effective, it required an average of six, one-hundred year old trees to treat each patient. Effectively killing it, the extraction of paclitaxel had major consequences for both the Pacific yew and the organisms that benefited from its presence. The extensive harvesting of Pacific yew trees led to the tree’s near-extinction, prompting researchers to investigate alternative resources.

To perform a complete synthesis of paclitaxel in itself was too laborious to be maintained at a practical rate, causing researchers to seek a semi-synthesis alternative to the anti-cancer agent. In recent years, researchers have identified that Canada yew bark contains the same anti-cancer agent in high abundance. Fortunately, researchers have since developed a method to synthesize a medicine using this chemical as a template without using the same magnitude of trees as the Pacific yew. Scientists quickly realized to establish a sustainable source of Canada yew, cultivation would be necessary. Today, Canada yew is grown in nurseries and is one of the main sources of a semi-synthesized derivative of paclitaxel (commercially referred to as taxol), which has provided one of the most significant treatments in cancer therapy.