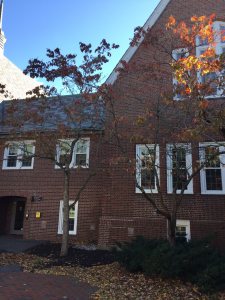 Also known as boxwood or cornel, flowering dogwood (Cornus florida) is a common ornamental tree found in the United States. Its popularity is due to its large flowers and wide range across climate and habitat. The wood is smooth, close-textured, and hard, making it desirable for tools handles, knitting needles, and spools. During the Civil War, the bark was dried, ground, and steeped as a tea, serving as a substitute for quinine in an effort to treat fevers.

As part of the Cornaceae family, which includes 10 genera and 90 species of trees, shrubs, and herbaceous plants, flowering dogwood is a small understory tree that can have singular or multiple trunks. The native range of flowering dogwood varies immensely, extending from Texas across the Eastern United States and from Southern Maine to Northern Florida. Flowering dogwood can grow on both well-drained and moist soils. However, saplings struggle in extremely wet conditions. Topographically, it can be found on flat lands as well as lower and middle mountain slopes. Shallow rooting systems prevent this tree from growing on upper mountain slopes and ridges.

Before the leaves are born in the spring, fragrant flowers appear arranged in tight clusters. and have four white, petal-like, bracts (modified leaves) surrounding the floral bodies. These flowers generally bloom between mid-March to late May depending on the geographic region. Over the summer, the flowers slowly evolve into bright red drupes about 0.5 inches long and 0.25 inches in diameter. Between September and late October, the red drupes ripen and develop a thin flesh. Each drupe contains a two-seeded stone, which can produce another tree. Flowering dogwoods will typically take six years to mature and bear flowers and fruit. 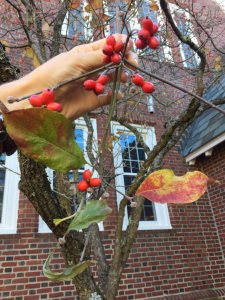 Although the red drupes are beautiful, they are poisonous to humans due to high fluorine concentrations. Flowering dogwoods are beneficial to their environment in several ways. When the leaves fall, the leaf litter decomposes at a much higher rate than other species found in similar regions. For example, flowering dogwood’s leaves will decompose ten times faster than the leaves of oak trees. This trait impacts the nutrient levels of the soil and increases the soil’s fertility. Wildlife (chipmunks, foxes, skunks, rabbits, deer, beavers, black bears, squirrels, and birds) also makes use of the fruit’s level of calcium and protein. Deer and rabbits will eat the twigs and buds.

Flowering dogwood is endangered in the state of Maine and threatened in the state of Vermont. This is partly due to the Anthracnose fungus, a disease that causes tan and purple spots to appear on the leaves. The disease starts towards the base of the canopy and slowly progresses upwards in the trunk to main branches and shoots. Eventually, cankers form and girdle the tree. Fungicide and pruning dead branches can help to decrease infection. By planting this tree ornamentally, it encourages the reproduction and repopulation of flowering dogwood.

Fruit – Bright red drupe in clusters of 3-4, fruit may be retained throughout winter