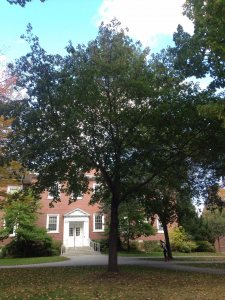 Leaves – simple, deciduous, opposite, 5-7″ lobed along the entire margins with milky sap in the petioles.

Norway maple (Acer platanoides) is a large deciduous tree that can reach up to 90 feet tall with a symmetric, dense crown. Reigning all the way from Europe and Western Asia, Norway maple was initially introduced to the United States in 1756 by John Bartram from Philadelphia for ornamental purposes. Farmers and towns desired this tree for its broad-leafed shade as well as its hardiness and adaptability to colder conditions. Norway maple was often used as a “boulevard tree,” much like American elm (Ulmus americana), because the tall, broad canopy created a pleasantly shaded roadside aesthetic. From its sudden increase in popularity, Norway maple seeds soon “escaped” from their original cultivation sites and have become a native tree species in many areas in the United States.

Norway maple is now considered to be an invasive species in the Northeast region of the U.S. Norway maple is extremely hardy and is adapted to live in many different conditions including harsh soil types, acidic areas, very hot and dry climates, and polluted areas. Norway maple seeds are able to spread quickly and travel a fair distance through wind dispersal, greatly increasing their seedling recruitment. Once these trees are established in a new territory, they grow rapidly and outcompete surrounding plants, displacing native tree or shrub species in the process. Furthermore, Norway maple trees are tolerant trees, and can grow under the dense shade of surrounding trees. The Norway maple has become very well adapted as a tough competitor.