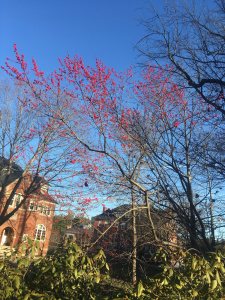 Leaves – Lance to egg shaped, alternate, deciduous, with sharply toothed to serrate margins. They are shiny and dark green above, lighter in color and pubescent below.

Twigs – thin, gray, and scattered bumpy lenticels. An important identification characteristic is the presence of a singular vascular bundle scar, with a black dot or thorn like stipule on either side. Buds are small.

Fruit – showy red/orange drupes. They appear on the twigs in clusters of 2-4, ripen in the fall, but persist throughout the winter.

Silvics – Found from Nova Scotia to Alabama and as far west as Missouri. Thrives in areas of poorly drained acidic soil such as near ponds, lakes, streams, and rivers.

As winter approaches and the leaves begin to fall, few deciduous trees manage to stand out amongst the rest. In forests of grey bark and bare, skeletal branches, winterberry (Ilex verticillata) is more than likely to catch the eye. Red berries grow in bunches along the twigs, persisting into the winter, and are the most prominent feature found on the tree. The striking nature of the berries often lead people to use their twigs for decorative wreaths, or even plant saplings as ornamentals.

Winterberry is a member of the Aquifoliaceae family, also known as the Holly family. Unlike holly, winterberry drops its leaves at the end of autumn. The leaves themselves are two to three inches long with an elliptical to obovate shape and an acuminate tip. They are shiny and dark green above, lighter and slightly pubescent below. The leaf margins are serrate to doubly serrate, but not sharp or bristled like other hollies. The young twigs can have a purple hue in the winter, but will fade to grey as they age. Bumpy lenticels are found along the length of both young and older twigs. Very small buds located above the leaf scar are present on the twig. If no leaves or berries can be found on the tree, winterberry can be identified by the single bundle scar found within the leaf scar. Often two black thorns or stipules can be found flanking the bundle scar.

Before the iconic berries make their entrance in the winter, they exist as flowers through spring and summer. Winterberry’s inconspicuous flowers are greenish to white in color. Individual trees possess either male or female flowers, but not both as the species is dioicous. Female flowers are found in clusters of one to three, while male flowers are found in clusters of two to ten. Only the females produce berries, and only after being fertilized by a male plant. Subsequently, the majority of individuals planted as ornamentals are female, but people hoping for berries must also plant a male close enough to fertilize them.

Winterberry can be found across the eastern half of North America in both yards and forests alike. While it is relatively versatile and easy to cultivate, it grows optimally in wet sites, such as swamps, or in more acidic soils. Those using the tree as an ornamental will find that its aesthetics attract the eyes of more than just neighbors.

Flitting in and out of winterberry’s thin, gray branches are wood thrushes, eastern bluebirds, American robins, and cedar waxwings. When growing in the wild, the tree often forms thickets which provide ideal nesting locations for these birds. This is due to winterberry’s ability to grow root suckers, which allow a single organism to grow many main stems. Even as ornamentals, both birds and mammals flock to winterberry but are often drawn to different parts of the tree. The birds gorge themselves on the berries in the winter months, as other food sources tend to grow scarce. Mammals, such as moose, whitetail deer, and snowshoe hare focus most of their grazing on winterberry’s leaves. 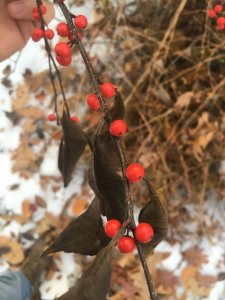 Despite the number of animals who find nourishment in winterberry’s fruits, humans should avoid ingesting them. The plant is toxic to our systems, as it contains theobromine, a chemical compound similar to caffeine. Theobromine poisoning results in low blood pressure, elevated heart rates, and stomach and digestion issues. For most adults, avoiding the berries is not an issue, but the red berries can prove attractive to young children.