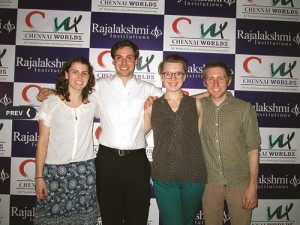 At a tournament of over 600 of the world’s greatest debaters from over 70 different countries, four daring Batesies rose to the top and made team history when they cleared to elimination rounds at the world’s most prestigious debate tournament.  The team’s success at WUDC 2014 adds further distinction to what is proving to be the program’s most successful year ever in British Parliamentary Debate.

Jack Stewart ’14 & Taylor Blackburn ’15, who previously made team history by winning both the Yale and Brandies Inter-Varsity BP Tournaments, finished in 21st place out of almost 350 teams!  Stephanie Wesson ’14 & Matt Summers ’15 also cleared, coming in 39th place, making 2 of the 7 American teams to break at Chennai Worlds representatives from the BQDC.  Last year, Ben Smith ’13 & Cat Djang ’13 doubled our team’s total count of WUDC breaks, and this year Jack, Taylor, Steph, and Matt have doubled that total for the second consecutive year!

For the full story published by the Bates Student, visit this link: http://www.thebatesstudent.com/2014/01/15/brooks-quimby-goes-international/