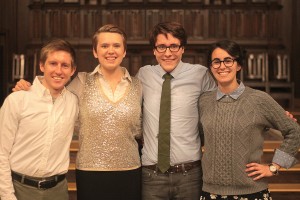 The BQDC and Brandeis host an intercollegiate public debate on Thursday, Feb. 27 at the Perter J. Gomes Chapel.

Bates defended the motion: This house believes that feminism is incompatible with capitalism.  Representing the BQDC were Jack Stewart ’14 and Taylor Blackburn ’15, who earlier this season finished as the 21st place team at the World Championships in Chennai, India.  On the Brandeis bench were Megan Elsayed ’14 and Michael Norton ’16; both Megan and Michael are veteran debaters who have won many awards on the American Parliamentary Circuit.

The debate proved to be a resounding success; many students remarked on the interesting and thought-provoking nature of the motion, in addition to the talent and eloquence of the speakers, who received great praise for their skill in argumentation – great job everyone!