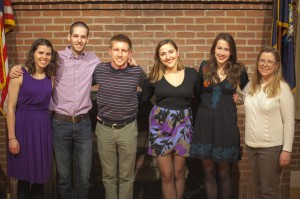 Members of the BQDC assemble for the Annual Team Banquet.

Each spring, the Brooks Quimby Debate Council hosts a team banquet to celebrate the achievements of the senior class and to reflect on the team’s accomplishments over the course of the season. Following the team dinner, each member of the graduating class offers brief remarks about his/her experiences while a member of the BQDC. This year, the BQDC graduates the following members of the class of 2014: Evan Binder, Chris Bolger, Emily Meade, Sara Maneval, Emily Schwalbe, Amy Strada, Jac Stewart, and Stephanie Wesson.

The Oren Nelson Hilton Award: Given to the man or woman adjudged best in extemporaneous speaking: Taylor Blackburn ’15

The Charles Sumner Libby Prize: Given to two members of the Quimby Debate Council who have most contributed to the debate program through outstanding service to the Council: Emily Schwalbe ’14 and Matt Summers ’15

The Almon Cyrus Libby Prize: Given to the best debater in his or her first year of competition: Zoë Seaman-Grant ’17

The Irving Cushing Phillips Award: Given to the student who has made the most progress in debate or public speaking: Evan Binder ’14

The Clair E. Turner Award: Given to three students who have shown in the preceding year the greatest forensic ability and integrity in public debate: Taylor Blackburn ’15, Matt Summers ’15, Jac Sewart ’14

Robert J. Branham Award: The prizes will recognize individual excellence in overall performance, presentation, special effort, improvement or support for the team and its ideals: Emily Schwalbe ’14 and Ben Claeson ’15

The Christopher M. Laconi ’05 Debate Award: Given to a graduating senior who has demonstrated outstanding eloquence in public debate: Stephanie Wesson ’14