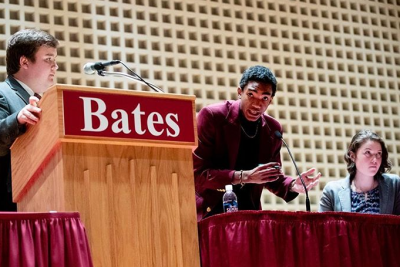 This ever-popular contest between members of the debate teams of Morehouse and Bates Colleges honors Dr. Mays, a Bates debater, longtime president of Morehouse, pioneer of the Civil Rights Movement, and primary mentor to Martin Luther King Jr.

This year’s motion: “This House believes that social justice movements should prioritize socioeconomic class over race and gender.” Bates senior Harry Meadows and Morehouse junior Hatim Mansouri debated for Side Government, elaborating upon the benefits of having a primary focus on socioeconomic class. Bates senior Abby Westberry and Morehouse junior Zach Manuel debated for Side Opposition, proposing instead a primary focus on race and gender.