By Brenda Reynolds. Published on September 23, 2013 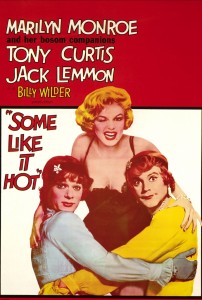 Did you know that the writer/director of such quintessentially American films as “Some Like it Hot” and “Double Indemnity” was born in Austria?  Billy Wilder, who worked as a newspaper reporter and screenwriter in Germany, emigrated from Europe just before the beginning of World War II.  He first found work as a screenwriter in Hollywood where his credits include “Ninotchka” (1939, Greta Garbo, directed by Ernst Lubitch) and “Ball of Fire” (1941, Barbara Stanwyck, Gary Cooper, directed by Howard Hawks).  Wilder continued to write films, usually with a partner, but also began directing.  Some of his best-known films, which are available on DVD in Ladd’s Audio/Video department are: