By Zachary Handlen. Published on October 4, 2013 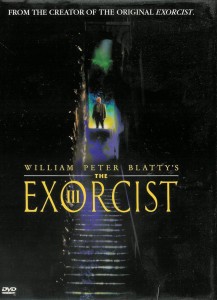 The Exorcist III is not a title that inspires confidence. The original Exorcist, which told the story of a young girl possessed by a demon and the two priests who join forces to free her, didn’t cry out for a sequel; and Exorcist II: The Heretic was a ludicrous, absurd mess, of interest only to bad movie fans looking for a good time. Exorcist III arrived in 1990, 13 years after the previous entry in the franchise. Written and directed by William Peter Blatty (the screenplay is an adaptation of his novel Legion), the movie has every reason to be a disaster. And yet it isn’t.

George C. Scott is a big reason why. Taking over for Lee J. Cobb, who played the role in the original film, Scott stars as Kinderman, a police detective struggling to solve a series of horrific serial murders. Few actors could play outraged compassion as well as Scott, and his warm, gruff performance grounds a film that occasionally threatens to grow too miserable and obscure. Blatty, a novelist who wrote the original Exorcist, had only directed one film before this one, the 1980 oddity The Ninth Configuration, but his style is assured, patient, and unflinching. There are a handful of sequences in The Exorcist III worthy of entry in the Horror Hall Of Fame; ask anyone who’s seen the film about “the hallway scene,” and wait for the flinch.

It’s not a perfect film. The plot, muddled by studio interference, doesn’t always hang together, and the pacing is occasionally more plodding than deliberate. But The Exorcist III is far better than it has any right to be, and stands as one of the rare horror sequels to expand on its predecessor in unexpected and effective ways. For fans of great scares, it’s worth a look. (And if you haven’t already, make sure to check out The Exorcist; Exorcist II is also recommended, but only for viewers with a taste for the terrible.)