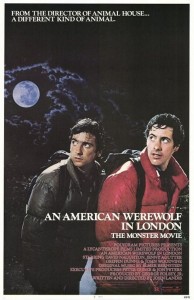 Of all the classic movie monsters, the werewolf is the most tragic. A vampire was human once, but post-bite, he or she is just a sexual predator in formal wear. A mummy is a corpse with an ego; the Creature from the Black Lagoon is a lizard with pretensions; the Invisible Man is a creep; and Frankenstein’s monster–well, okay, Frankenstein’s monster is pretty darn sad. Still, the Wolf Man gives them all a run for their money. A werewolf is two characters at once: the hero we root for, and the beast who must be stopped. There is no cure for lycanthropy, and no quick fix. The best one can hope for is a securely locked basement and friends who are willing to put you there whenever the moon grows full.

On its surface, the plot of An American Werewolf In London (1981) follows the genre’s most basic requirements. David Naughton plays an American tourist attacked by a monster while hiking through the English countryside with a friend (Griffin Dunne). Dunne dies, but Naughton survives, a lucky break which soon reveals itself as a fate worse than death. The American deals with his loss and starts a romance with a nurse (Jenny Agutter), but as the weeks pass and the lunar cycle approaches its peak, he’s troubled by bad dreams, visions of his dead traveling companion, and the growing certainty that something awful is about to happen, and it’s almost certainly going to be his fault.

There’s little surprise to any of it, but then, surprise isn’t really the point. What makes the movie so effective is its grim determination to see its premise through to the end, combined with the strange, off-beat touches director and screenwriter Jon Landis uses to make that trip worthwhile. Naughton’s nightmares post-attack reveal a subconscious struggling with its transition from fundamentally decent young man into feral killer, and Dunne’s slowly rotting ghost strikes a perfect balance between humor and pathos. Rick Baker’s special effects work remains some of the greatest in the history of horror cinema. Werewolf manages the neat trick of being funny and scary at once without ever losing sight of the monster’s melancholy heart. 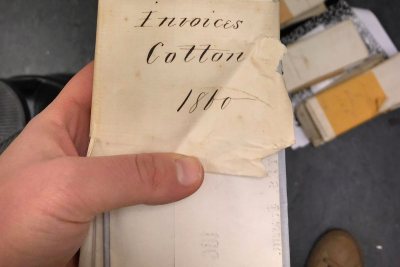