Favorite Music of our Student Assistants 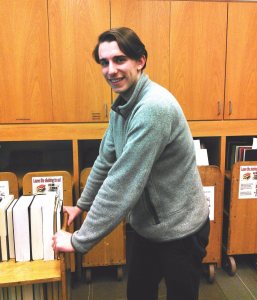 My favorite genre is 60’s and 70’s Blues Rock, especially music by Cream, Led Zeppelin, and Creedence Clearwater Revival (CCR). Mostly known for their blending of American blues with the emerging technologies of the time period which allowed for manipulations in sound, Cream and Led Zeppelin formed two of the most famous “super groups” of the era. Comprised of some of the most renowned musicians of all time, Cream and Zeppelin frequently ventured out of their genre and displayed their versatility with songs such as “Anyone for Tennis”, SWABLR”, “Going to California”, and “Moby Dick”.

CCR was similarly formed by musicians with a blues foundation, but produced tracks with more of a folk inspired swamp-rock sound. Such a style enhanced the content front-man and singer/songwriter, John Fogerty’s lyrics, reflecting on pre-industrial iconography and rural southern life within the United States, as exemplified in “Born on the Bayou” and “Lookin’ Out My Backdoor”.

Vinyl Albums in our Collection:

Those Were the Days, Cream