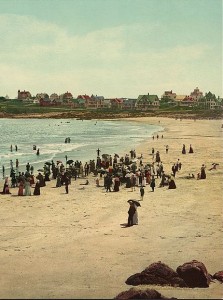 It’s summer, which in Maine means heat with occasional rain. If you’re looking for ways to cool down, the library has plenty of books and music to get lost in.

The Stand, by Stephen King: There’s nothing quite like a good beach read, and The Stand is one of the best: an epic tale of faith, courage, and horror in a post apocalyptic world. First published in 1978, King’s novel about an America ravaged by a man-made super-flu, and the survivors who band together to face an even more terrifying threat. At just over eight hundred pages long, it should eat up the next few months. PS3561.I483 S7 1978

Wolf Hall, by Hilary Mantel: The story of Henry the VIII and his multitude of wives has everything: sex, power, death, and people in very expensive clothing. Hilary Mantel’s novel (the first in a proposed trilogy; the sequel, Bring Up The Bodies, is also excellent) tells the tale through the eyes of the man who would, for a time, be the king’s closest adviser: Thomas Cromwell. The son of a blacksmith, Cromwell rose to power through a combination of cunning and luck, and Wolf Hall charts that rise, with all its tragic underpinnings. PR6063.A438 W65 2009

The Left Hand Of Darkness, by Ursula K. Le Guin: Or maybe you’re looking for a book that doesn’t take a wheelbarrow to carry? Ursula L. Le Guin’s classic novel comes in just over three hundred pages, and could easily be polished off in a couple of lazy afternoons. The vision of a world in sexual gender and orientation is defined entirely by context is one that remains startlingly relevant even today, over four decades after the novel was originally published. Le Guin’s elegant, empathetic prose should serve as a cool contrast to the warm weeks ahead. PS3562.E42 L4 1976

Begin To Hope: Summer isn’t summer without the right music. For something peppy, sweet, and more than a little melancholy, it’s hard to do better than Regina Spektor’s Begin To Hope. The album’s 12 tracks range from wistful to rocking to romantic to, naturally, hopeful; Spektor’s piano-centric approach to pop music and her gorgeous, frequently astonishing voice, is a great way to pass the time on those long car rides to the beach. COM XM 350 .S6623 B44 2006

Into The Woods: Last December saw the big screen release of Stephen Sondheim’s classic musical Into The Woods. The movie was passable, but anyone who’s never listened to the original Broadway cast recording owes it to themselves to check it out. A mishmash of classic fairy tales that explores the challenges and frustrations of growing up and dealing with loss, this show has some of Sondheim’s best work as both a composer and a lyricist. From “Agony” to “It Takes Two” to “On The Steps Of The Palace” to “No More,” and a dozen more besides, this CD should provide the perfect soundtrack to those looking for adventure. COM XM 250 .S65 I58 1988