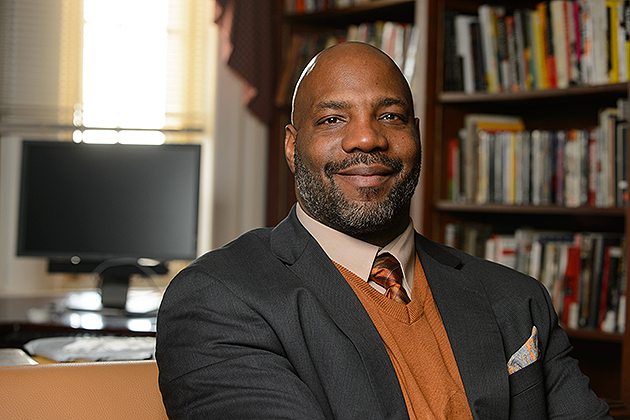 Dr. William Jelani Cobb will give the King Day keynote address at Bates on Jan. 18, 2016. (Peter Morenus/University of Connecticut)

Dr. William Jelani Cobb is an associate professor of history and the director of the Africana Studies Institute at the University of Connecticut. He specializes in post-Civil War African American history, 20th-century American politics, and the history of the Cold War.

A staff writer at The New Yorker, Cobb is the author of The Substance of Hope: Barack Obama and the Paradox of Progress (Bloomsbury, 2010) and To The Break of Dawn: A Freestyle on the Hip Hop Aesthetic (New York University Press, 2007), which was a finalist for the National Award for Arts Writing.

Cobb’s forthcoming book is titled Antidote to Revolution: African American Anticommunism and the Struggle for Civil Rights, 1931–1957. His writing has appeared in the Daily Beast, Washington Post, Essence, Vibe, The Progressive, and TheRoot.com, as well as The New Yorker.

He has contributed to several anthologies including In Defense of Mumia (Writers & Readers, 1996), Mending the World (Basic Civitas Books, 2002) and Beats, Rhymes and Life (Three Rivers Press, 2007). He has been a featured commentator on MSNBC, National Public Radio, CNN, Al-Jazeera, CBS News, and other national broadcast outlets.

Cobb has received fellowships from the Fulbright and Ford Foundations.

Born and raised in Queens, N.Y., he was educated at Jamaica High School, Howard University in Washington, D.C., and Rutgers University, where he received a doctorate in American history in May 2003.