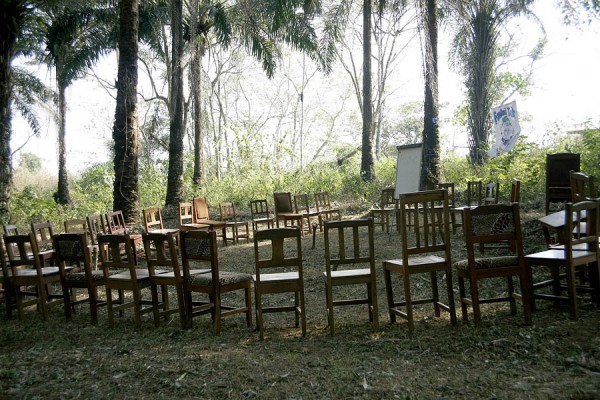 Site of the Community Consultation in Kailahun, where Fambul Tok Staff met with local stakeholders to ask whether they wanted to launch the program in their district. Photograph by Sara Terry.

Libby Hoffman, executive producer of the film, will take part in a discussion after the screening. Open to the public at no cost, the event is sponsored by the Bates anthropology and politics departments and the “Considering Africa” general education concentration. For more information, please contact 207-786-8295.

Decades of corrupt government left the Western African nation of Sierra Leone vulnerable to a civil war that began in 1991 and lasted for 11 years, leaving the resource-rich nation impoverished and traumatized.

“Fambul Tok,” or “family talk,” is the term for an unprecedented grassroots peace-building program revived from an ancient tradition in Sierra Leone. It rebuilds communities by bringing perpetrators and victims face-to-face in ceremonies of truth-telling and forgiveness.

The first feature-length film by producer-director Sara Terry, Fambul Tok follows John Caulker, a Sierra Leonean who has committed his life to the practice of fambul tok, and his team of volunteers who travel miles of destroyed roads and jungle footpaths to implement it.

Viewers witness raw and painfully intimate moments and learn about the horrific toll of war. More importantly, they are privy to a culture of forgiveness — one that seeks to heal the nation through the restoration of relationships and community instead of punishment and retribution.

This film paints a vivid, accurate and respectful portrait of healing by telling this story through the eyes of family, friends and community leaders. Ideally, viewers experience the transformative effects of fambul tok and gain insights into an original model for peacemaking that’s applicable to the rest of the world.

“It was a tricky thing to make a film that tries to let a culture speak for itself while being mindful of a Western audience that I fully expected would be baffled by the idea that truth-telling and forgiveness equate with justice,” Terry explains.

Terry was an award-winning reporter who transitioned into documentary production in the late 1990s. Her work has been published internationally, and her book Aftermath: Bosnia’s Long Road to Peace (Channel Photographics, 2005) was named one of the best books of the year by Photo District News.

Terry is also the founder of The Aftermath Project, a nonprofit grant program that helps photographers cover the aftermath of conflict and build educational outreach.

Formerly a political science professor at Principia College, Hoffman left academia to focus on the practice of peace-building, with an emphasis on the link between individual and community transformation. She has developed and led conflict-resolution training programs in a variety of settings.

In 2003 she founded Catalyst for Peace, a private foundation based in Portland that supports locally rooted peace-building around the world as well as the means to share stories of this work. It was in her capacity as president of Catalyst for Peace that she began working with Terry to document stories of forgiveness and reconciliation in post-conflict Africa.

In the course of this work, she met Caulker and they began the partnership that led to the founding of the Fambul Tok program in Sierra Leone, alongside the commitment to document the process in film.

Fambul Tok International incorporated as an international organization in 2009, with Hoffman serving as president.