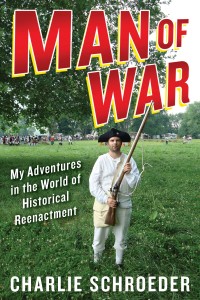 Charlie Schroeder '95 has penned Man of War: My Adventures in the World of Historical Reenactment.

The Washington Post and other reviewers say Man of War by Charlie Schroeder ’95 offers entertaining insights into the lives of war reenactors.

During a year spent with various reenactment groups, Schroeder, a Bates theater major, played a German soldier fighting the Soviets at Stalingrad (in Colorado). He lived in a Roman fort and battled Celts (in Arkansas) and experienced the Vietnam War (in Virginia). There were stints in the French and Indian War, and the Civil War. And he was a Viking, too.

“Schroeder…got into reenacting because he longed for history. He grew up in an 18th-century log cabin in Mennonite country, where history abounded, but he didn’t notice it. In L.A., though, where history lasts about 12 seconds, he started to miss the past. After touring a living history program in Southern California, he had an idea: ‘What if I could reenact my way through history? To learn not only about the hobby but maybe, just maybe, about the past too?'”

But the book isn’t all earnestness, as Smith and others point out.

Barton Swaim of The Wall Street Journal says it’s worth the price of the book just to read the part about the Colorado ranch owner, a Vietnam vet no less, who doesn’t want ersatz Nazis taking on faux Soviets on land adjoining his, which prompts a young reenactor to mutter, “Leave it to a dumb redneck to ruin it for everybody.”