Director of Athletics Kevin McHugh announced that he will step down on June 30, 2017, after a decade of service to Bates athletics marked by competitive success, a growing national reputation for inclusivity and community engagement, and significant improvements to Bates’ athletics facilities. 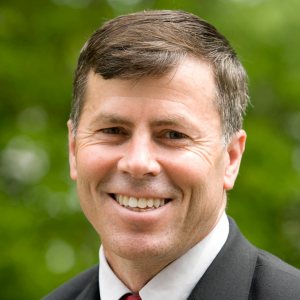 Bates College Director of Athletics Kevin McHugh will step down at the conclusion of the 2016-17 academic year. (Phyllis Graber Jensen/Bates College)

“I have truly valued my time at Bates, and after a decade in the role, I am ready to seek new challenges,” said McHugh, who is chair of the Department of Physical Education. “I am extremely proud of the progress we have made on and off the field, as well as the student-athletes and staff with whom I have had the privilege of working.”

McHugh added that he feels “great fulfillment in how Bates athletics helps our student-athletes ‘engage the transformative power of our differences,’ in the words of our mission statement. Every student-athlete is supported by so many others — from professors and staff to a wide community of friends, family, and alumni. I appreciate the power of Bobcat spirit and am proud to have been a part of this community during so many notable athletic achievements.”

Dean of the Faculty and Vice President of Academic Affairs Matthew R. Auer, in sharing the news with the Bates campus community today, praised McHugh’s “vital contributions to our athletics program at Bates,” adding that “I am extremely grateful for his leadership of this essential area of college life, his dedicated support of our student-athletes and coaches, and his personal contributions to our institutional ideal of educating students not only as competitors but as whole persons.”

“I have admired Kevin’s extraordinary dedication to our students and coaches and his service to the college as a whole since I first arrived on campus four years ago,” said President Clayton Spencer. “Kevin has strengthened Bates’ national identity and our position in NESCAC, the most competitive Division III academic and athletic conference in the country.”

The Bates athletics program comprises 31 varsity sports and 11 club sports as well as numerous intramural programs. Approximately half of the college’s 1,750 students participate in varsity or club intercollegiate athletics.

Since arriving in 2007, McHugh has overseen historic achievements on the field, including the college’s best-ever ranking, in 2015, in the annual Directors’ Cup measuring U.S. collegiate success at the NCAA tournament level.

His tenure has included Bates’ first NCAA team championship, in women’s rowing in 2015; individual national titles in track and field, squash, and tennis; a first-ever NCAA tournament bid for men’s lacrosse; a return to the NCAAs for women’s lacrosse and men’s basketball; and the improvement of the football program, now at its strongest in 30 years and winners of a share of the Colby-Bates-Bowdoin Conference title for five straight years. Bates athletes have earned more than 200 All-America honors since 2007, and the college has hosted two NCAA championships, in skiing and men’s tennis. 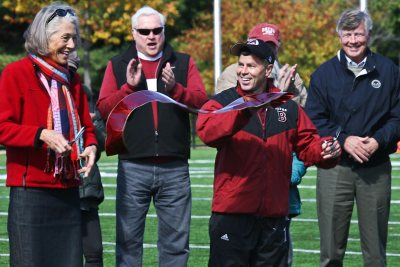 Off the field, McHugh and his staff have led numerous initiatives designed to improve the student-athlete experience, to support Bates’ historic commitment to diversity and inclusion, and to foster community engagement.

In 2013, Bates joined the national You Can Play initiative to support LGBTQ inclusion. Featuring President Spencer and Bates athletes, the college’s testimonial video for the project was the first in the nation to include a college president. In May 2012, Bates was one of 10 colleges to be included on Campus Pride’s first ever “Out to Play List,” for its inclusive tradition and practices.

Other student-focused initiatives include leadership training for captains and emerging team leaders; sexual-assault prevention and education programming; and co-sponsorship of campus climate and social justice programs.

“Bates has a commitment to offer athletics opportunities for anyone who wishes to stay active.”

Bates athletics’ engagement with the Lewiston-Auburn community includes, among other examples, free youth clinics and after-school programming; raising funds for holiday support for families in need; volunteering at a local food bank; donating sports equipment; and “adopting” a child facing a life-threatening illness. The athletics program enjoys an extensive partnership with Special Olympics and sponsors an annual Student-Athlete Advisory Council Field Day that brings local children and Bates athletes together on campus for a day of play.

Facility improvements during McHugh’s tenure include the major renovation of historic Garcelon Field in 2010 and a new rowing boathouse in 2016, both 100 percent funded by donors. Speaking about the Garcelon Field renovation, McHugh underscored its importance to all students who wish to stay active. “Bates has a commitment to offer athletics opportunities for anyone who wishes to stay active,” he said. “Those lights will often be on until 11 p.m. for everything from varsity practices to intramural games, smack in the middle of campus near all our other great facilities.”

Prior to his arrival at Bates in 2007, McHugh served in a variety of leadership positions at Yale University, Bowling Green State University, and The College of New Jersey, where he served as director of athletics from 1987 to 2007 and was inducted into the college’s hall of fame in 2013.

After the academic year opens in September, the college will begin the process of organizing a search, which will include broad consultation with the college community.