Carl Benton Straub, a revered and influential Bates scholar, teacher, and academic leader whose ideas, vision, and love for the college influenced generations of faculty and students, died Nov. 15, 2019, at his home in Lewiston, Maine. He was 83 years old.

Straub joined the Bates faculty in 1965 and retired in 2005, a 40-year span that included 17 as dean of the faculty and vice president for academic affairs. He retired as dean emeritus of the faculty, professor emeritus of religion, and Clark A. Griffith Professor Emeritus of Environmental Studies.

Memorial Information
A campus memorial service previously scheduled for Oct. 10, 2020, has been postponed due to COVID-19 concerns. A new date has not been determined. In accordance with his wishes, any memorial will take place in the Peter J. Gomes Chapel.

Memorial gifts can be sent to The Olivia and Ellwood Straub Endowment, Office of College Advancement, Bates College, 2 Andrews Road, Lewiston ME 04240, or follow this link to designate an online memorial gift. 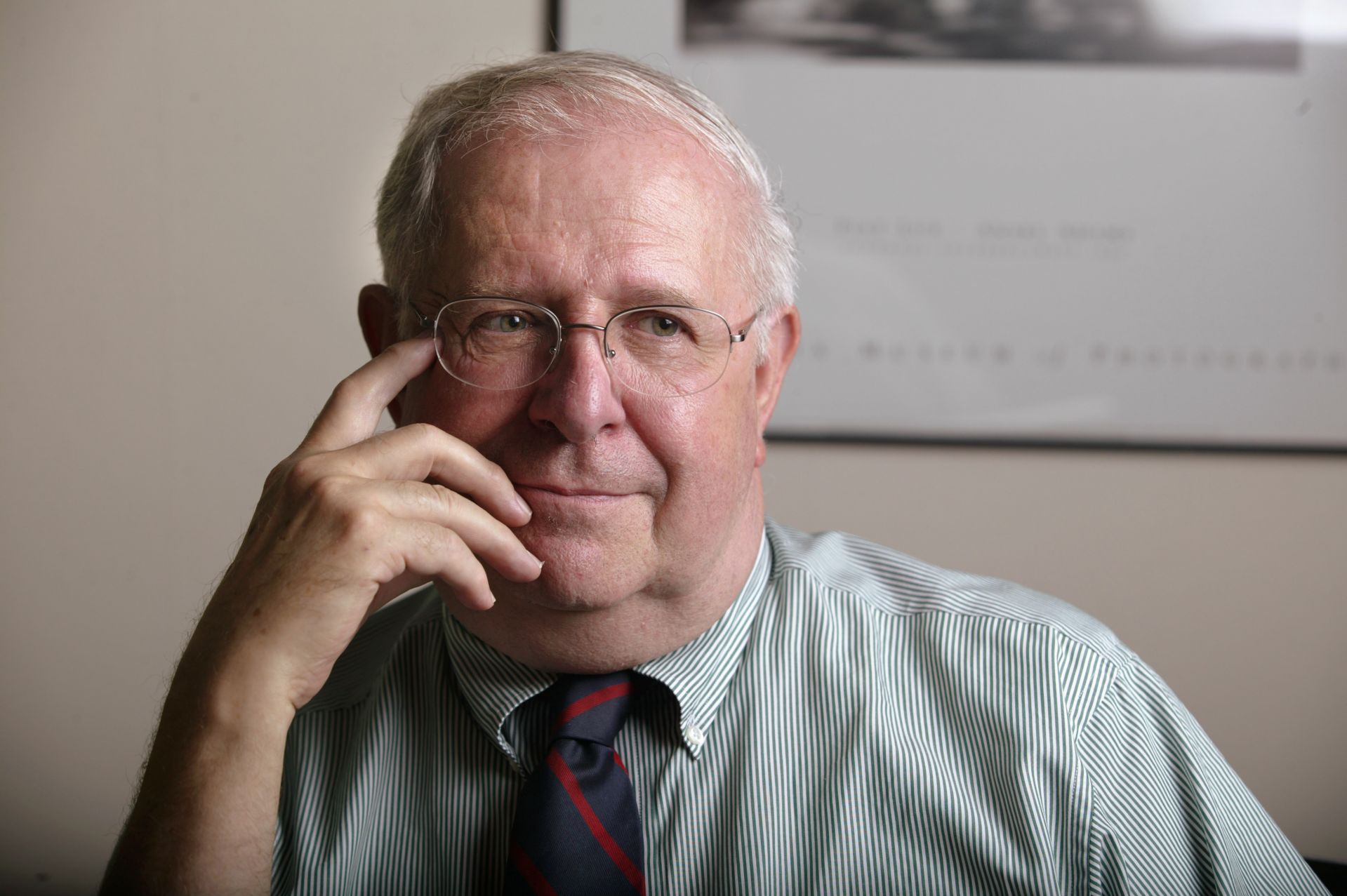 “From the moment Carl Straub set foot on this campus, he used his talents to serve students, colleagues, and the institution with unwavering care,” said President Clayton Spencer.

“Carl was a pivotal figure in shaping the academic character of the Bates we inhabit today. He was adventurous, interdisciplinary, and, to borrow a phrase he used nearly 55 years ago, a leader with ‘an audacious spirit of experimentation.’ Formidable and steadfast, Carl will be deeply missed. As he would often say at the start of his public remarks over the years, Bates is a place of ‘memory and hope.’ He gave us both, in great and generous ways.”

Images from the life of Carl Benton Straub.

Straub was born on April 17, 1936, in Carlisle, Pa., the son of Olivia and Ellwood Straub, and grew up in nearby Mechanicsburg. He earned a bachelor’s degree in philosophy and religion from Colgate University in 1958 and a bachelor of sacred theology degree from Harvard Divinity School in 1961. He received a doctorate from Harvard University in 1971.

At Bates, Straub first served as an instructor in religion and in the Cultural Heritage curriculum, a required general-education core program that spanned the history of key cultural ideas.

Early on, he displayed institutional awareness and an interest in building community and improving campus life. He asked the college to end its hidebound, rules-and-regulations approach to residential life and instead focus on “nurturing students in the ways of responsibility, which, of course, is the hallmark of the liberally educated person,” as he once wrote.

Straub had a profound effect on the college’s academic character and its professoriate in his 17 years as dean, appointing a generation of scholars to the faculty and helping to expand the breadth, depth, and excellence of the Bates academic program under President Thomas Hedley Reynolds, with an especially positive effect on the professional pride of the faculty. 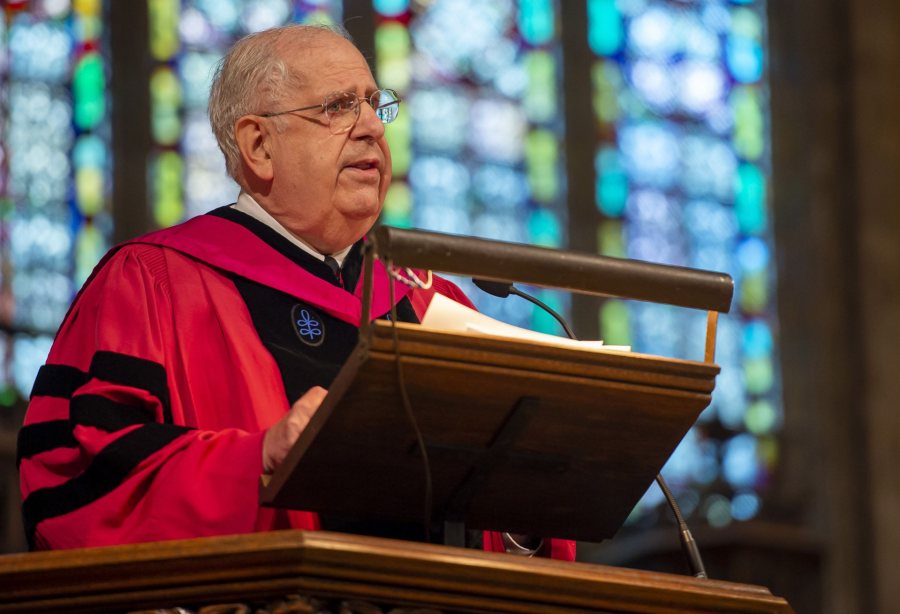 Carl Straub speaks during the service for renaming the Bates Chapel in memory of the Rev. Peter Gomes ’65 on Oct. 25, 2012. (Mike Bradley/Bates College)

“Carl had an extraordinary interest and curiosity in what we were working on, regardless of our field of inquiry,” says Jane Costlow, a member of the faculty since 1986 who succeeded Straub as the college’s Griffith Professor. “He made it quite clear how life-giving and connecting the world of scholarship can be.”

He was the past chair of the American Conference of Academic Deans. In 1987, he was selected to the first-ever delegation of American academic deans to visit the then-Soviet Union to meet officially with university rectors and faculty in St. Petersburg, Moscow, and Odessa.

Straub loved college ceremonies and their rituals, especially Commencement, seeing it as an “annual, earnest, and effective gathering to acknowledge our heritage and confirm our mission,” as he once wrote.

He especially valued the contributions of honorary degree recipients, “who bear witness to the human possibilities of grace, integrity, and high achievement.” As dean, he wrote 111 honorand citations.

Frequently in his career, Straub delivered remarks specially crafted for Bates celebrations, both large and small. Eloquent and erudite, he imparted meaning and insight through well-researched metaphors, historical comparisons, and scholarly references. 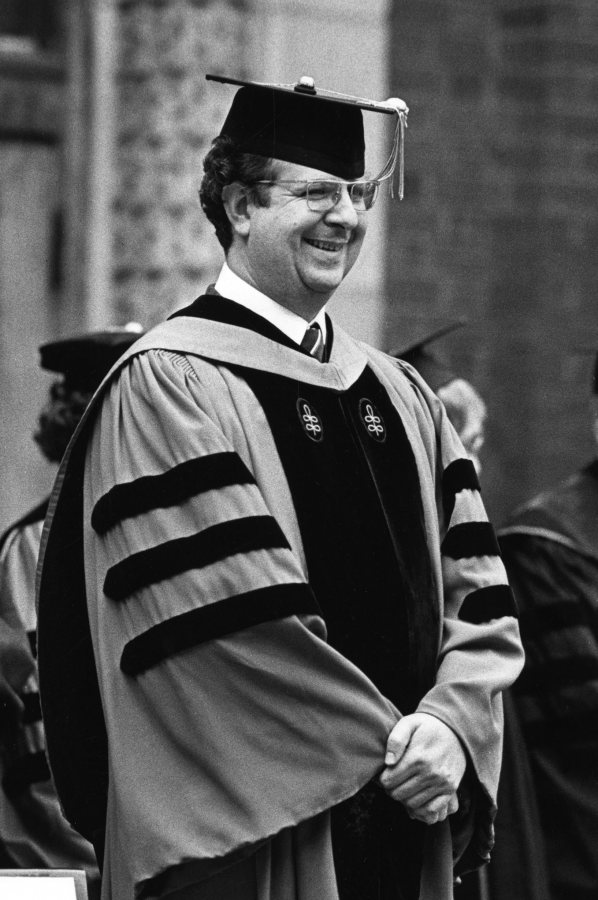 Peppered with wry wit, his remarks at such occasions often reflected Straub’s belief that a residential liberal arts college affords a valuable sense of place.

“He cherished the Bates campus,” says Costlow. “He had a profound understanding of how human communities are shaped by their natural context,” whether a formal and organized space like Lake Andrews or “open, relatively unorganized spaces on campus — like a kind of free space for imagination and thought.”

“He created a classroom culture and relationships with students that fostered curiosity, humility and compassion.”

Retiring from the deanship in 1991, Straub returned to teaching and in 1996 was appointed the inaugural Clark A. Griffith Professor of Environmental Studies.

He contributed prodigiously to the Bates classroom. He advised 70 senior theses and another 70 student research or independent-study projects. Fittingly, his last public talk was to his former students, at the college’s annual Reunion in June 2019, where he spoke to the Class of 1969 on the intersection of climate change, public discourse, culture, and aesthetics.

“Carl helped cultivate a deep sense of wonder, especially for the natural world,” said Matt Schlobohm ’00, one of Straub’s former students. “He created a classroom culture and relationships with students that fostered curiosity, humility and compassion — encouraging us to wrestle with fundamental human questions about who we are, where we are going, and about our place in and relationship to the natural world.” 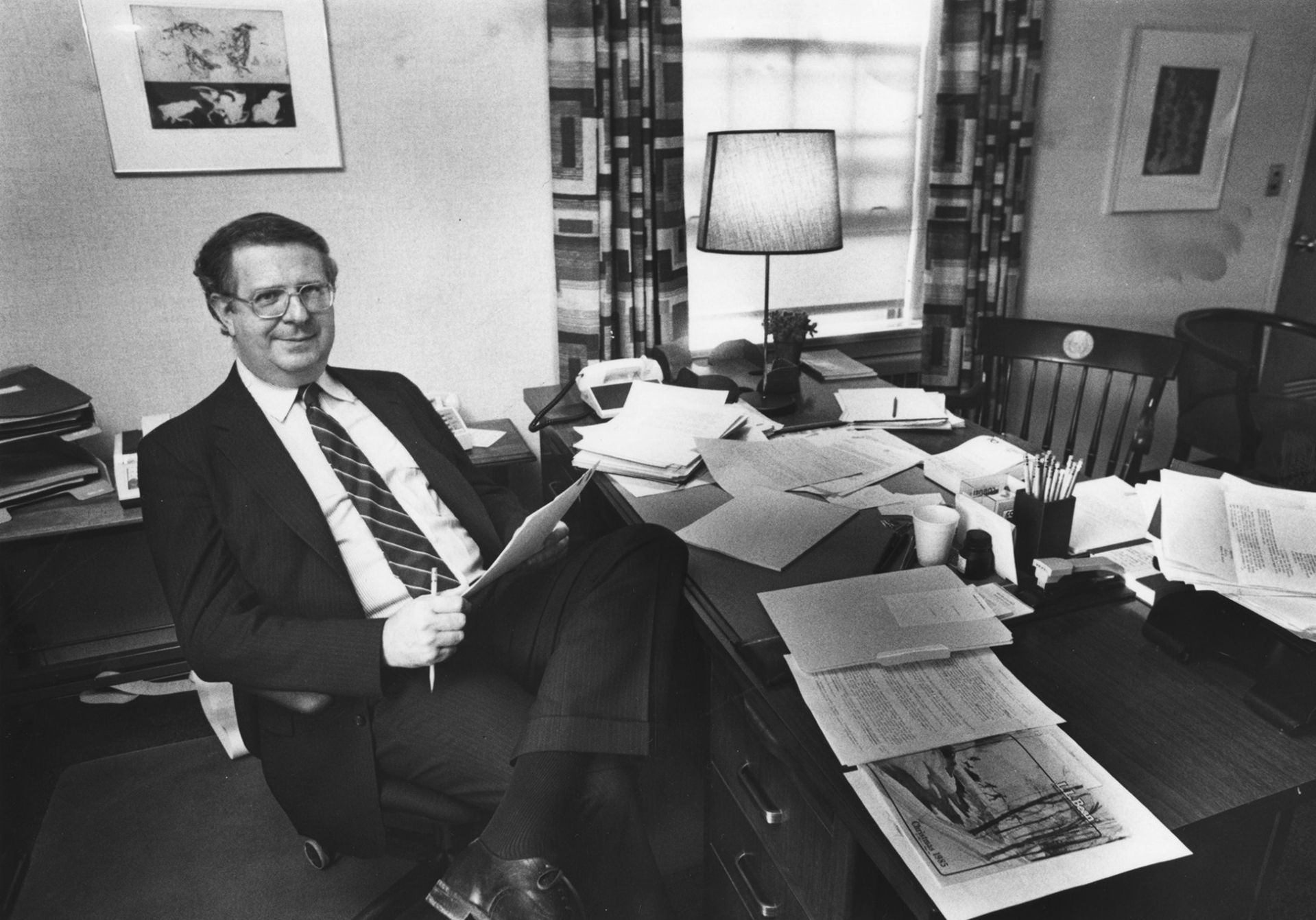 Carl Straub, seen in his office in 1985 during his time as dean of the faculty. (Muskie Archives and Special Collections Library)

As a scholar, Straub focused on religious interpretations of the American landscape and on environmental ethics, as well as on the relationship between religion and other cultural expressions, such as art and political mythologies. He had a particular interest in the American Shakers, and in 2009 published the book Honorable Harvest: Shakers and the Natural World.

His colleague John Strong, Charles A. Dana Professor Emeritus of Religious Studies, noted that Straub was not a recent arrival to the then-emerging field of environmental studies but one of its “pioneers,” pointing to Straub’s own doctoral thesis in 1971, an examination of the Puritans and their wilderness environment that was a “concept before its time.”

In addition to service to Bates on faculty committees, Straub served on more than 50 ad hoc advisory or personnel search committees. He was the founding chair of the Philip J. Otis Endowment Committee, a signature program honoring the spiritual and moral dimensions of environmental studies through invited speakers and fellowships. 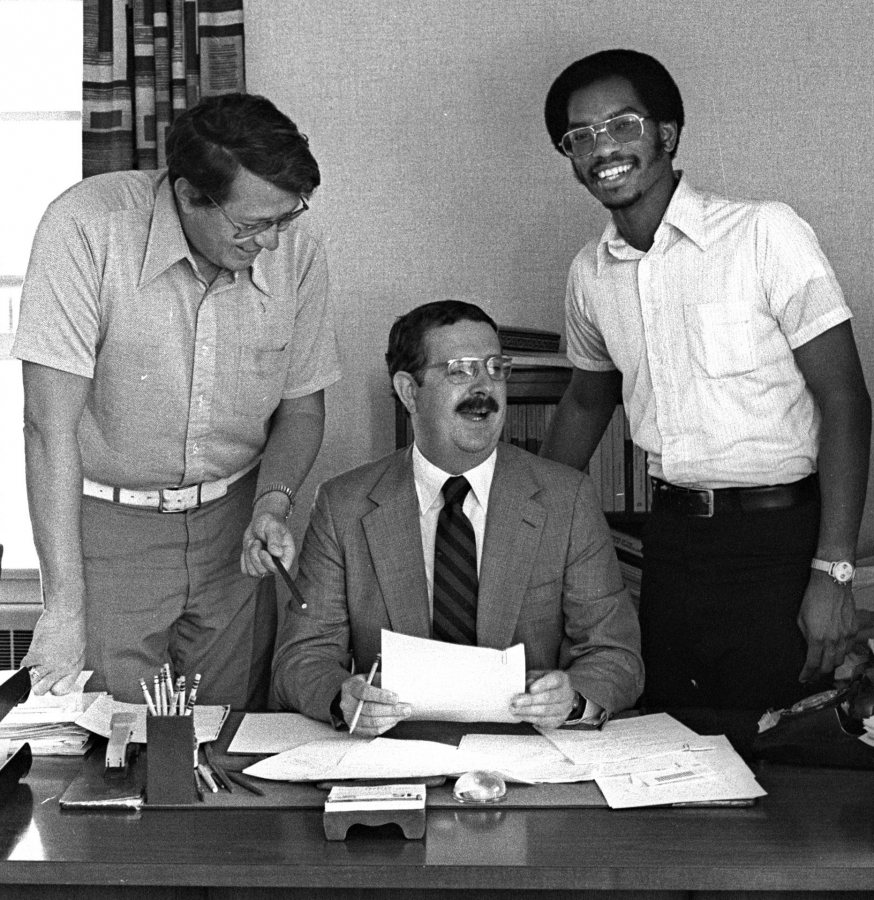 He believed strongly in the arts’ ability to enable understanding of one’s place in the world.  In 1991, he established the Olivia and Ellwood Straub Endowment at Bates to support the college’s acquisition of landscape artwork. He was a member of the Maine Arts Commission, and a trustee of the Portland Symphony Orchestra and of the Maine College of Art.

Straub was a fellow of the Society for Values in Higher Education and received an honorary degree from Unity College in 1990 for service to higher education, the arts, and the environment in Maine. In 2008 he received the Distinguished Service Award from the College Key, the Bates alumni honor society.

Straub served as president of Maine Audubon’s board of trustees and on the board of the Maine Tree Foundation. In Lewiston-Auburn, he was a member and officer of the Stanton Bird Club and member of the Community Forest Board.

For decades he cherished his land and camp in nearby Sumner. It offered him a physical place to think, to slow down, and to foster his spiritual connection with nature. He cared for the land as a retreat and would often convene friends and students there. 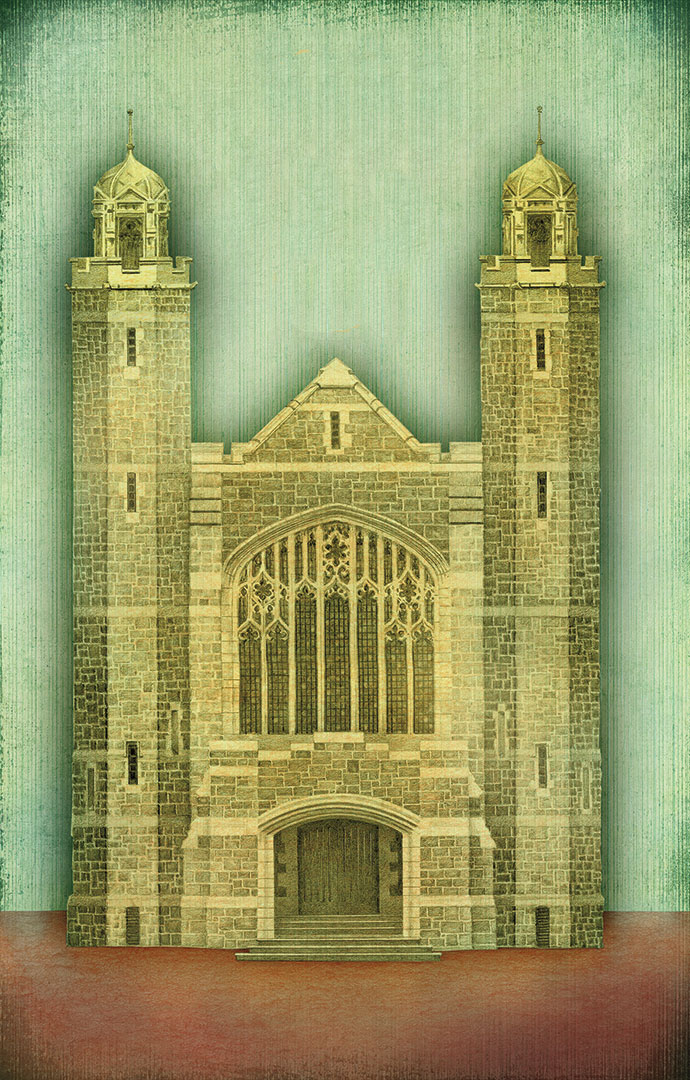