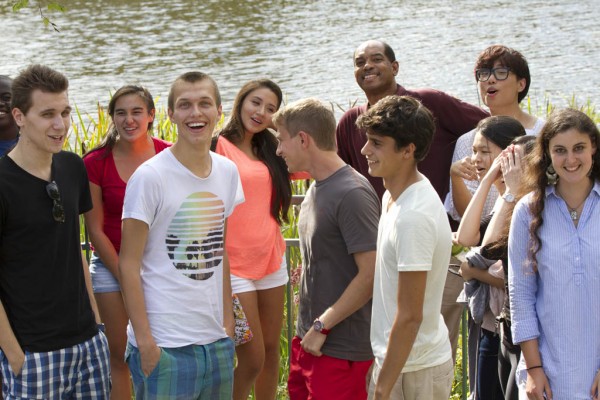 The 503 members of the Bates Class of 2016 now entering the college constitute the most selective and geographically diverse class in the institution’s history.

The Bates Office of Admission received 4,905 applications for the class, up 6 percent from two years ago, and offered admission to 1,304 of the applicants — a record-low admittance rate of 26.6 percent.

“We’re able to be so highly selective because of the appeal of Bates’ innovative and rigorous liberal arts education,” said Dean of Admission and Financial Aid Leigh Weisenburger.  “As always, we’ve tried to recruit and select in a way that will sustain our enrollment of intellectually curious and deeply engaged students — which is important for both them and the college.”

Women make up 54 percent of the first-year class, men 46 percent, while U.S. multicultural students (African American, Asian American, Hispanic or Native American/Pacific Islander) make up 16 percent. A tenth of the class are the first members of their families to attend college, while 9 percent have a relative who attended Bates (also known as “legacies”).

Geographically, the class comes from 34 states and 26 countries, in these proportions:

The financial-aid figures for the entering class also reflect Bates’ traditional welcome to students of all incomes. (The college meets 100 percent of calculated financial aid need for all matriculants who have such need, for a full four years.) Forty-one percent of the first-year class will receive need-based financial aid, with aid packages averaging $38,894; including $36,296 in the form of Bates grants, keeping the portion provided by work and/or loans to approximately $2,600. Bates’ comprehensive fee for 2012-13 — which includes tuition, fees and room and board — is $57,235.

Weisenburger said, “In addition to the academic strength of the class, the percentage coming from public schools is noteworthy because it speaks to the college’s founding and continuing principle of seeking and welcoming students from all backgrounds who could benefit from and contribute to Bates’ richly textured learning environment.”

She added, “These numbers tell much of the story, but at a place with such a highly personal approach to education, we’d be remiss not to say that they represent 503 fascinating, gifted, curious and adventurous individuals who are so much more than what numbers possibly can tell about them.

“We feel this class will add greatly to the intellectual breadth and the diversity of backgrounds at Bates — geographic, economic, ethnic and otherwise — and we’re eager to formally welcome them into the Bates family.”