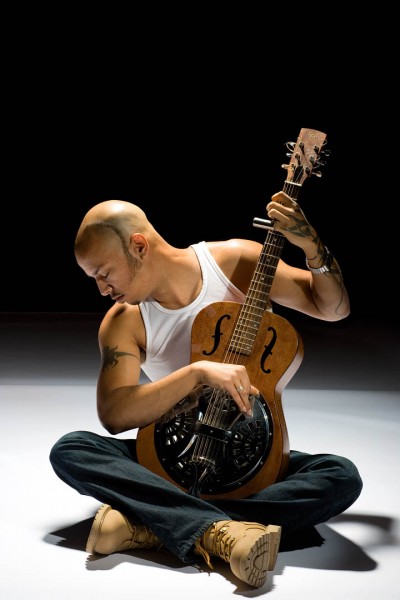 Samuel James will perform solo at 6:30 p.m. Thursday, Aug. 1, on Bates’ Historic Quad, at College Street and Campus Avenue. Admission to the series is free, and audience members are encouraged to bring picnics and chairs or blankets.

A deeply soulful singer, virtuoso instrumentalist and captivating storyteller, James has spent recent years touring North America and Europe. He comes from a line of performers dating back to the 1890s, including dancers, storytellers, a session jazz pianist and porch-stomping guitar thumpers. His songwriting encompasses themes from the heavenly flights and evil depths of love to tales of true and bizarre folk heroes.

He has released three recordings conceived as a trilogy, all on the Northern Blues label. Of his debut, 2008’s Songs Famed for Sorrow and Joy, Allmusic Guide wrote, “In an era when popular music is becoming increasingly perfect-sounding, and robotic, [James] provides a much needed alternative.”

For Rosa, Maeve and Noreen followed in 2009. Completing the trilogy is 2012’s And for the Dark Road Ahead, praised for transposing a mid-20th-century country-blues aesthetic into the high-tech present.

James has performed at music festivals from New Mexico to Ottawa to Poland, and at venues including San Francisco’s Biscuits & Blues, Montreal’s Club Soda, the Green Note in London and Johnny D’s in Somerville, Mass.