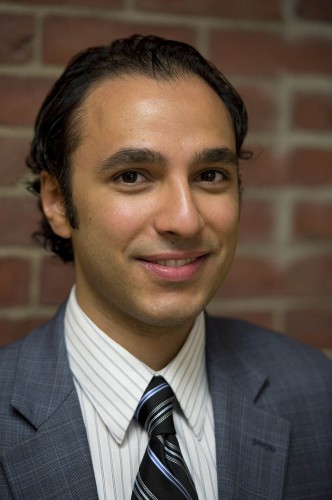 Ali Akhtar, assistant professor of religious studies and of classical and medieval Studies.

Appointed assistant professor of religious studies and of classical and medieval studies at Bates in 2012, Ali Humayun Akhtar studies the complex interactions among political, religious and intellectual establishments in Europe and the Islamic world in medieval and early modern times.

Akhtar is particularly interested in the Mediterranean as a cultural crossroads. “The medieval Mediterranean, especially from the 11th to the 16th centuries, was a fascinating patchwork of Islamic and Christian kingdoms where multilingual Muslims, Christians and Jews often studied and traded in the same cities, from Toledo and Palermo to Thessaloniki and Istanbul,” he says.

He notes that these Mediterranean communities were very cosmopolitan, with theologians and merchants working in a spectrum of languages such as Arabic, Judeo-Arabic, Latin, Greek and Turkish. That’s a quality shared by Akhtar, whose command of foreign languages — fluent or advanced in seven — gives him entrée to such intellectual treasure houses as Istanbul’s Süleymaniye Library and the Spanish National Research Council of Madrid.

To him, there are contemporary lessons to be mined from these old writings. “Scholars can paint a picture of the medieval political and intellectual landscape throughout the Mediterranean region in a way that can help modern societies better understand their current affairs and trajectories,” Akhtar says.

“Figures like Maimonides, Averroes and Aquinas teach us to re-examine certain modern assumptions, like the notion of a necessary clash of civilizations.” In fact, he continues, it’s possible that the Arab Spring will open up opportunities for students from the West and the Middle East to learn more about each other.

“Liberal arts students around the world have the potential to become a new generation of paradigm-shifting modern polymaths,” he says, “in the way that Averroes, Maimonides and Aquinas shifted the historical trajectory of philosophy and science.”

Akhtar is a native of New Jersey. Prior to Bates, he taught at Bard College and at New York University, where he received his doctorate in both history and Middle Eastern studies. He completed his bachelor’s degree at Cornell in 2004.