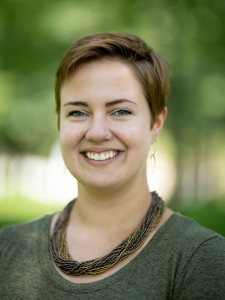 No stranger to Vacationland, Audrey was born, bred, and educated right here in Maine. A proud member of the Bates Class of 2017, Audrey is excited to be back on campus exploring her new role in the Office of Admission. As a student, Audrey could be seen on and off stage as a Theater and Rhetoric double major and Music minor. Some highlights of her time at Bates include her short-lived stint on the Women’s Rugby Team (it was her, not them), portraying a variety of characters on stage, directing the college’s only all-female a cappella group (Go Meris!), and frequently rushing through Commons with a sandwich in one hand and coffee in the other. Audrey’s love of Bates (and talking) led her to work in the Office of Admission first as a tour guide and later as a Senior Fellow, where she developed a passion for admission work and supporting students through the college process. After two wonderful years working in Admissions at the University of Vermont, Audrey is delighted to be back where it all began.