Week 2: Hue: the Imperial Culture of the Last Dynasty in Vietnam

During two days-off in Hanoi, I suggest that students to visit Bat Trang—the traditional ceramic village—which dates back to the sixteenth century, and is still occupied today; and the Museum of Ethnology. Thao will help you with all these.

Highlights of the week. After the first week studying in Hanoi and its vicinity, we travel by bus to central Vietnam. On the way, they will visit Hoa Lu, the first capital of Vietnam, and the dynastic temples that honored the founding rulers of the country in the tenth century. We also visit Phong Nha Carven, the best known natural caves in Vietnam. In 2004, Phong Nha was recognized by UNESCO as the world natural heritage. From the entrance to the caves, we could see hundred of B-52 bomb craters in the area. We then travel through Quang Tri province, known as the DMZ (demilitarized zone) during the Vietnam War, and if the conditions permitted, we will visit the largest cemetery named Truong Son, where thousands and thousands of the northern Vietnamese soldiers were buried.

Another important focus for this week is Hue, the last dynastic capital of Vietnam, which lasted from 1802 to1945. Hue has long been the heartbeat of the country, a center of political intrigue, cultural innovation and religious place. It is also known for the fierce fighting on battle grounds during the 1968 Tet Offensive. In 1993, UNESCO designated Hue a World Heritage site because of its complex monuments. Here we visit the citadel and the forbidden city of the Nguyen dynasty and the imperial tombs, the famous Buddhist temple, Linh Mu on the bank of Perfume River. During this time, we participate in some cultural activities: having a royal dinner with imperial costumes inside the old palace and listening to Hue traditional music performed on a boat on the Perfume River. 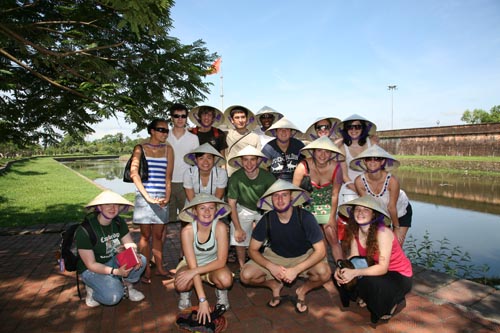