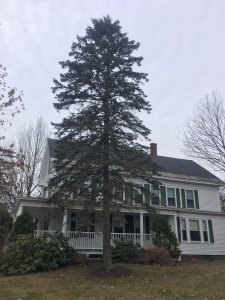 We all recognize the tree chosen by Charlie Brown in the popular holiday cartoon, A Charlie Brown Christmas. Charlie’s evergreen had a short, crooked form, with wimpy branches and needles that easily dropped off. Evidently, Charlie Brown had picked a tree completely opposite from the most common species of Christmas tree – the blue spruce. Known for its pyramidal form and sharp blue-green needles, blue spruce has become famous for both its wide-spread use as an ornamental and as a Christmas tree.

The American West is perhaps one of the nation’s most visually dynamic regions, and the blue spruce adds a distinct quality to this landscape. The blue spruce is the official state tree of both Colorado and Utah. The native range includes the Central Rocky Mountain region, where blue spruce can be found at high elevations. Its range spans from southwestern Wyoming, to eastern Idaho, and northeastern Arizona to southern New Mexico. Unlike Charlie Brown’s Christmas tree, the blue spruce is capable of withstanding drought and extreme low temperatures better than any other spruce. However, it grows best on sites with moist soil, in intermediate shade, and at an elevation of 6,000 – 9,000 ft. 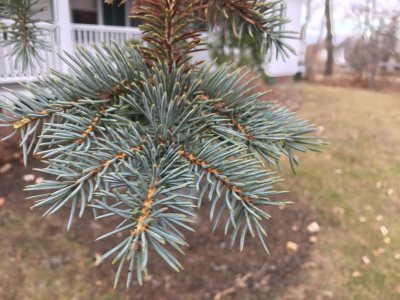 Westbound frontiersmen and settlers did not take long to recognize the attractiveness of the blue spruce. When discovered in 1861, writers described it as “a finely shaped tree” and “the most beautiful species of conifer.” Once discovered out west, entrepreneurs who saw the value of the tree as an ornamental, commercialized the blue spruce. By the late nineteenth century, the blue spruce had been successfully planted throughout America, and even reached Europe. Regarding the residential use of blue spruce, author and naturalist Donald Culross Peattie remarked that, “as a hedge, it is so close growing and cruelly prickly as to be boy-proof and is indeed impenetrable to still smaller animals.” The size and form of the tree also makes the blue spruce a popular windbreaker tree.

Today, the main human use of the blue spruce, other than as an ornamental, is for harvesting Christmas trees and has been planted in many parts of the continental United States. Even in the northeastern United States, the blue spruce can rival the balsam fir as a preferred Christmas tree species. Unfortunately, also found in the northeast is a fungus known as the spruce killer (Leucocytospora kunzei), which can cause cankers on a quarter to a half of the branches of blue spruce. This pathogen can cause a severe loss of branches, decreasing the monetary value of an infected Christmas tree plantation. On the bright side, there is usually some poor sap named Charlie Brown willing to take in less than desirable Christmas trees.

Leaves – Evergreen needles; about 1 inch long; borne at nearly right angles to twig; may or may not be bluish with glaucous bloom; very sharp pointed; with pungent taste.

Twigs and Buds – Glabrous; stout (when compared to other spruces); tan; needles are borne on woody pegs; bud scales brown and noticeably reflexed.