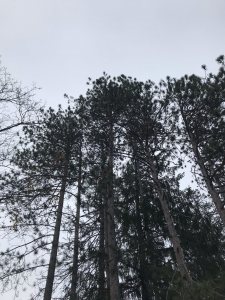 The red pine tree, found in North America, can perhaps be best likened to the underwhelming cousin of the more widely known white pine. The qualities of the white pine made it a staple for the early industrial needs of our country, predominantly shipbuilding, thus cementing its place in our nation’s history. Meanwhile, the red pine stood quietly and strongly in the backdrop, basking largely undisturbed in its own subtle beauty.

Red pine is a shade intolerant, long-lived species and is one of the most genetically uniform forest trees, reaching heights of 60 to 150 feet. It’s latin name quite literally means the pine that secretes resin. Stands are typically found from Newfoundland west to Manitoba and south to Pennsylvania. They commonly occur in scattered plots throughout forests and can be found growing along dry, rocky ridges, or sandy soil. Perhaps the most distinctive characteristic of the red pine is its reddish-brown bark, which is divided into broad, flat ridges by shallow fissures. If the bark does not give its identity away, the needles most certainly can. Despite the red pine’s needles having a flexible makeup, they do snap when bent between two fingers.

If white pine ever goes missing, carpenters will rejoice to learn that the wood of the red pine is fairly strong, proving to be heavier and harder than the white pine. Despite the beneficial carpentry qualities, red pine will always be playing second fiddle to the white pine’s superior weight to strength ratio. This may disappoint would-be lumberers, but the red pine still has it’s industrial niche. The strong wood makes it ideal for telephone poles and street posts. Additionally, the red pine was harvested for lumber extensively in the Great Lake States during the 1800s. Today, the red pine is the state tree of Minnesota. 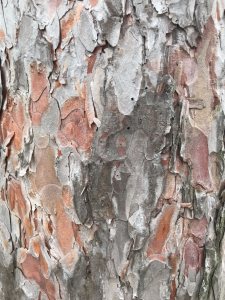 What the red pine lacks in commercial value, it gains in ecological prowess. In a world where diseases, parasites, and severe weather can kill most trees, the red pine has found an unlikely ally, fire. Some say redheads are kissed by fire; the same can be said for the red pine’s relationship with fire. Red pines are fire resistant, and historically, fire has helped perpetuate them. In fact, peaks in red pine regeneration generally occur in the years following fire. The red pine naturally prunes itself much more extensively than it’s other pine cousins, making for tall thin trees without understory branches, something beneficial in the event of a fire. If surface fires were to occur, the bark of the red pine is somewhat resistant to burning. Fire gives red pines a huge edge in that it helps control competing understory vegetation, exposes mineral soil for favorable natural seedbeds, and opens the canopy to promote establishment and growth of seedlings to more advanced ages. In a world seemingly headed for more industrialization, more drought, and more fire, the red pines can stand easy knowing that their characteristics make them a stalwart for outlasting its neighbors and other pine cousins.

Needles – Organized in fascicles of two needles that are each roughly 4-6” long. The evergreen needles are long, dark green, soft, and flexible.

Cones – Typically egg shaped, 2” long, on short stalks, and lacking prickles. They mature in the second season wherein they usually stay on the branches until the following summer.