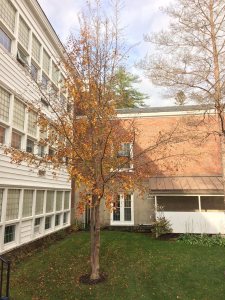 Japanese stewartia, originally from Japan, was introduced to the United States and is now popular with landscape artists due to its attractive year-round appearance. Its flaky bark creates a splotched, nearly camouflage look that is a mix of speckled orange, grey, and brown, which makes the tree recognizable almost immediately, even in the winter. Japanese stewartia produces 2-3″, white, five-petaled flowers in the early summer. The flowers bloom much later than other popular ornamental trees of its size, visually setting it apart in a landscape. In autumn, stewartia leaves turn to vibrant reds, oranges, and purples. This year-round showiness often earns the tree plots anywhere from college campuses to private backyards.

Maintenance of the stewartia is relatively minimal after planting. Naturally it will grow mulitiple stems, which is sometimes favored for its hedge appearance. However, it will often be pruned to allow for a clearer view of the trunk. Beyond pruning, caretakers have little to worry about, as there are few predators which threaten the tree. Deer even dislike the taste of the leaves. 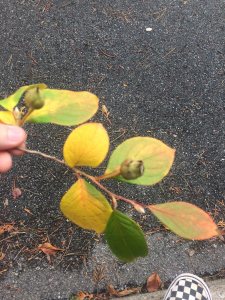 Leaves – Deciduous, simple, alternate leaves, with obovate (ovate with the more narrow end at the base) shape and serrulate (forward facing finely toothed) margins, ranging 2-4” long and deep green in color that turns a mix of purple, yellow, and red in fall.

Bark – Thin and flaky, color is a mottled mix of reddish browns, oranges and greys