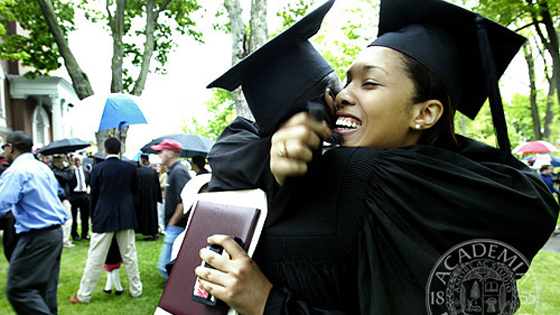 The ceremony over, Pamela Conley savors the moment with a classmate.

Fending off a threatening rain nearly until the end of its 137th annual Commencement, Bates College sent 443 graduates into the world in a ceremony that also honored a leading expert on religion and law, a pioneering cardiologist, the head of the United Nations Children’s Fund and the college’s recently retired sixth president. One of four honorary degree recipients at the event, Yale Professor of Law Stephen L. Carter offered a commencement address welcoming graduates to what he called the “reasoning class.” Joining Carter as honorary degree recipients were UNICEF Executive Director Carol Bellamy; renowned cardiologist Dr. Eugene Braunwald of Harvard Medical School; and Bates President Emeritus Donald W. Harward, who served from 1989 to 2002.