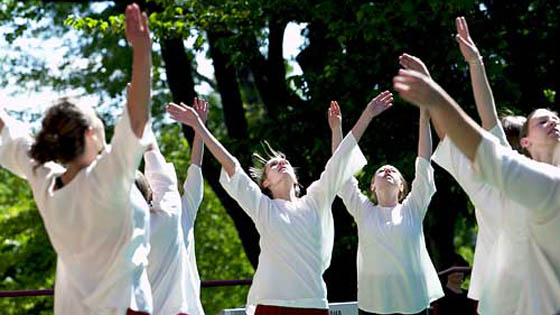 Members of the Class of 2004 perform "An Offering in Motion: Down to Earth. "

The College’s 138th Commencement saw the most notable change in tradition since 1971, the year President Hedley Reynolds, urged by the senior class, moved the exercises from the Lewiston Armory to the steps of Coram Library.

The energetic gathering of some 2,500 family, friends and members of the Bates community heard President Elaine Tuttle Hansen cite “Middlemarch” author George Eliot in her introduction, in which she expressed a reluctance to lose touch with the departing class. “Who can quit young lives after being long in company with them,” Hansen quoted Eliot, “and not desire to know what befell them in after years?”